Try to look into the eyes of Malala Yousafzai, the 14-year-old Pakistani girl who was shot in the head by Taliban militants this week because she was advocating for universal education and the rights of girls, without despairing for the future. The war between human advancement and religious authority now has a human face. But it is a far wider war, threatening to engulf a country of 180 million people.

Yet even as Pakistanis rose in outrage against the shooting, influential people in both Pakistan and the West were dismissing the scope of the problem she has come to embody.

This is just a regional problem, Pakistani elites say. Her home is in the Swat Valley, in Pakistan's lawless northern frontier, where extremist forces from Afghanistan are at work. This, they say, has nothing to do with the rest of Pakistan. And many Westerners, as well as Pakistanis, have rushed to condemn her shooting (and those of countless others) as a consequence of the U.S.-led drone war against the Taliban.

Yet the problem of religious extremism is not confined to Pakistan's border provinces. It is now present in all four major regions. Punjab, in the east, has become a stronghold of violent, sectarian extremist groups in its southern regions. Baluchistan, in the west, is home to an insurgency supported by extreme Islamist groups, such as Lashkar-e-Jhangvi, that are seeking religious government. Karachi, in the centre, is being ripped apart by Islamic violence and houses countless circles of radicalism. Even Sindh, in the south, has seen its historically moderate, secular values ruptured by the establishment of religious schools in rural areas, financed by Islamists, that are radicalizing a generation.

Nor does it make sense to blame the United States for this. While there may be good reasons for criticizing its anti-Taliban air campaign, the attack on Malala had nothing to do with drone strikes.

"This is a war that is within Pakistan," Pakistani historian Farzana Shaikh tells me. "It is between different visions of the kind of Pakistan people want … The Taliban themselves have blamed not U.S. policy or U.S. drone strikes for their attack on her, but the fact that she seemed to be promoting a secular agenda."

Both Westerners and many Pakistanis are all too willing to assume that these developments are an inevitable consequence of Pakistan being a poor, Muslim-majority, postcolonial state with bad neighbours.

Yet if you look around the region, you quickly realize that almost every other state is moving in the opposite direction. Bangladesh recently passed a constitutional amendment declaring itself secular and recognizing religious minorities. And while it has had Muslim-Buddhist riots recently, the government has made strong progress in reducing the influence and power of extremist groups. Education levels are on the rise, poverty is dropping and birth rates have plummeted. In India, home to almost as many Muslims as Pakistan, Islamic extremism is rare (and usually originates in Pakistan) and on the decline. Both countries have seen more moderate forms of Islam and secularizing trends dominate, while Pakistan has shifted toward the more hardline, restrictive, Saudi-based practices of the religion.

What is happening in Pakistan is not military or religious or social, but purely a failure of politics. By obsessing over its unnecessary war with India and squandering billions in aid on an overly powerful military, by devoting itself to internecine wars of dynastic politics and grotesque corruption, and by tolerating religious voices within the state, Pakistan has allowed fringe religious groups to become a surrogate for a government gone missing.

"The state over many years has reneged on its primary responsibilities toward average citizens in Pakistan," Dr. Shaikh says. "Things that one might normally have taken for granted from the state – access to decent education, access to decent health care, to housing – have simply not been there. That vacuum has been filled by many of these extremist groups, who have very powerful charitable arms."

Those groups are the ones building the new schools. They are also the ones forbidding girls from becoming educated. This, in turn, is feeding a deadly cycle of alarmingly high birth rates, overpopulation and poverty.

Where the state fails, religion steps in. Malala was trying to stop that cycle – and only the education of women, and therefore the removal of religion from education, will accomplish it.

Pakistan's future might be found in the eyes of Malala Yousafzai. Or it might lie with those who put a bullet in her head. Poorer, less generously assisted Islamic countries have prevented this from happening. Pakistan has no excuse. 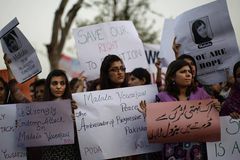 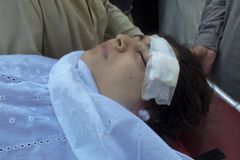