Many Canadians who will not vote Green will confide that they rather like Elizabeth May. She stands out as the only female party leader, and given her fourth-party status she can speak with a candour others won't risk. But there might be another ingredient to Ms. May's breath-of-fresh-air quality. With a platform focused on current environmental issues, she is the only party leader whose concerns feel fully contemporary. The other leaders, each in his own way, promise a return to an idealized past. The current federal election is being fought by not one but three conservative parties (plus the Bloc Québécois, arguably the most backward-looking of all).

Obviously, there are the Conservatives. The party of Stephen Harper evokes a Canada that existed before the 1960s launched an era of progressive political change. The Conservatives favour moral certitudes at home (on crime, most notably), and shoulder-to-shoulder combat abroad: an old-school world of good guys and bad guys. Although some fruits of the progressive era, such as medicare and Old Age Security, are too popular with older voters to attack, the Conservatives play up Canada's military history (Vimy, the War of 1812), display monarchist symbols and otherwise evoke the Canada of the early 20th century and before.

The New Democrats also want to turn the clock back – just not quite as far. They wish to restore the progressive agenda that animated the country during most of the second half of the 20th century. Thomas Mulcair's NDP would like to strengthen the government programs we already have, and extend them still further with national child care and national pharmacare. Mr. Mulcair opposes the Trans-Pacific Partnership trade deal out of hand, as his party did with free trade with the United States in 1988.

The Liberals also want to see government get back to playing a more active role in building a just society. They promise to shore up the middle class by taxing the rich, and would take advantage of low interest rates by making major investments in infrastructure – a move that would require them to run short-term deficits. A temporary Keynesian stimulus spending jag: another bold pop from our political past.

Internationally, all three parties are also back to the future. The Conservatives favour displays of military strength and emphasize standing firm with our allies as in the ready-aye-ready days of unquestioning service to Britain and, more recently, loyalty to the United States through the Cold War. The Liberals and NDP would each strike a more Pearsonian stance, favouring soft rather than military power, and committing to the sometimes plodding work of multilateralism through international institutions. Like most Canadians, the latter two parties would like for Canada to stop accumulating fossil awards for environmental intransigence.

In short, all three of the front-runners are conservative in the sense that they wish to conserve or extend the political agendas of some part of our country's past. Why are there so few new ideas on offer?

For Stephen Harper, the past is an obvious fit: a time when manly, military virtues were valued; when hockey sticks clattered on every frozen pond; when neighbours left their doors unlocked without fear of marauding criminals, terrorists and women sporting niqabs.

The Liberals and NDP, meanwhile, must compete for the votes of Canadians who by and large approve of changes that transpired in their society post-1960: urbanization, immigration from around the world (not just Europe), social diversity, feminism, secularization, an expanded role for government and a Charter of Rights and Freedoms. Some of these voters may long for the recent past (a time before Mr. Harper assumed office in 2006), but with values that generally register flexibility and openness, they should in theory be receptive to a leader whose orientation is toward the future – not the future as imagined at Expo 67, but the actual future, with its new, interconnected challenges and possibilities.

In the months ahead, Canadians will see the machinations of their institutions and the choices of their fellow citizens play out in three acts: the Oct. 19 election, the response of the opposition to the Speech from the Throne (in the event that the election yields a minority), and whatever government takes shape thereafter. The future will come, whether we chart a course for it or not. Knowing which version of the past party leaders like best is a decent clue to how they might lead – but many Canadians would appreciate a few more glimpses through the windshield, not just into the rose-coloured rear-view mirror. 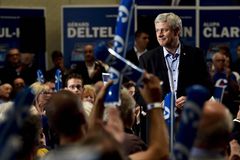