Oliver Schmidtke is the director of the Centre for Global Studies at the University of Victoria and a professor of history and political science.

Across North America and Europe, we're being confronted with a striking increase in hate crimes and symbols of intolerance toward minorities and migrants.

The University of Victoria and the University of British Columbia have both seen racist posters and activities on their campuses in recent weeks. "This brazen outburst of far-right anti-semitism at a Canadian university is a serious concern," noted B'nai Brith Canada CEO Michael Mostyn to media after white-supremacist posters surfaced at UVic in October.

We are understandably shaken by the growing prominence of a symbol that ought to have been irreversibly discredited by history: the swastika. Penned on walls in our cities, scribbled on desks in libraries and on campus whiteboards, left on public display in parks, exhibited endlessly on the internet – the hakenkreuz (hooked cross) as the symbol of Hitler's National Socialists and the Holocaust has made an eerie comeback.

How should we react to these intolerable displays of anti-Semitism? Is the public informed by the subsequent media attention, or does it merely provide visibility to acts of hate? Does the reappearance of the swastika in our public spaces indicate a rise in anti-Semitic and racist ideologies?

Clearly in many cases, the use of this symbol simply reflects ignorance. Let's presume the vast majority of those drawing the swastika in public places would be hard-pressed to explain what they're trying to invoke, let alone reflect on the symbol's relation to the myth of Aryan racial superiority and genocide orchestrated by Germany's fascist regime.

Yet this ignorance does not take away from the viciousness with which the swastika is used as an instrument of hatred.

One of the key challenges for those alarmed by this trend is the anonymity of those spreading an ideology of race-based hatred. The people behind the incidents at UVic and UBC remain invisible.

The internet is an ideal tool for disseminating messages of hate with little fear of repercussion. Legal instruments such as the prohibition of hate propaganda in Canada's Criminal Code remain difficult to apply to online hate sites.

Germany recently introduced a "social media law" in an effort to provide more robust investigative and legal means to address hate speech on internet platforms. The jury is still out on the effectiveness of such approaches.

What we must keep in mind amid the resurgence of hate crimes and overt displays of racism is that ugly posters celebrating white supremacy and swastikas in our public spaces are only the most obvious examples of a much subtler and troubling shift.

The most organized groups employing fascist messaging are in fact moving toward a more cautious use of direct references to Nazi-era fascism. Across Europe and North America, nationalist groups seek to gain respectability in mainstream politics and media. French politician Marine Le Pen sacked her father and founder of the Front National from the party after he described the Holocaust as a "mere detail" in history.

Similarly, organizers of the Unite the Right march in Charlottesville, Va. – or Germany's new party, the Alternative for Germany – carefully avoid conspicuous references to Hitler's regime.

Claims of white supremacists and extreme nationalists are now primarily framed in terms of protecting one's culture or identity, reflected in slogans such as "They won't replace us" or "Patriotic Europeans Against the Islamization of the West," which conceal overt reference to ideas of racial superiority.

With issues of migration and refugees looming large in public discourse, extreme nationalists have sensed the opportunity to spread their message to parts of society that once would have rebuffed the rhetoric of exclusion. We are confronted with a deliberate and insidious attempt to muddy the waters regarding what constitutes intolerable racism, especially when political elites accept this gradual normalization of exclusionary nationalism.

When U.S. President Donald Trump comments on the "fine people" among the white supremacists in Charlottesville, or when Polish Interior Minister Mariusz Blaszczak describes as "a beautiful sight" the Nov. 11 march of 60,000 extreme nationalists advocating for an exclusively Catholic and white Poland, it shakes the foundations of an inclusive and pluralistic society.

Such statements normalize and legitimize beliefs of cultural homogeneity that provide the breeding ground for race-based hate.

Recent history has demonstrated how vulnerable democratic practices and norms are to authoritarianism and extreme nationalism. We are currently at a critical threshold, as those with lived memory of fascist dictatorships and the Holocaust are aging and dying.

The role of our educational institutions, political leadership, media and civil society has never been more essential for educating coming generations of the threat that xenophobia and authoritarianism pose to the viability of a democratic and inclusive society.

Yes, images that call up the Nazi era rightly repel us. But the most insidious forces for racist hatred are among us, with no swastika in sight.

Opinion
Not all Nazis wear armbands: We have to be vigilant against normalizing evil
December 3, 2017 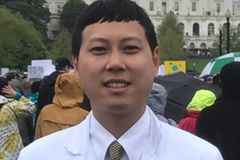