When I was 15, my mom sent me, kicking and screaming, to a private Anglican school. We had chapel every morning. Not even the Jewish kids were exempt.

Once a week, we had Scripture class with a kindly old fellow named Canon Bagley. None of it had the least effect on me, since I was already a hardened atheist. Nonetheless, I managed to win the Scripture prize, which included a gift certificate for a book of my choice. I chose the autobiography of Bertrand Russell, a famous philosopher who argued that religion was stupid and wicked.

Frankly, I don't understand why so many secular people go berserk over religious schools, even ones that are publicly funded. What harm do they do? In Ontario, the fight against Catholic schools has turned into a crusade. People seem to think they're a threat to our common values. They seem to think our kids will be turned into superstitious, God-struck, gay-bashing little bigots. (In fact, the opposite is more likely to be the case. Millions of people who endure religious education end up inoculated against religion for life.)

In Canada, the idea of religious freedom now means freedom from religion – and damn the consequences.

From an academic point of view, we should be encouraging Catholic schools. A lot of them are better than secular schools. According to a 2012 C.D. Howe study, 17 of the top 29 schools in Ontario are Catholic, even though the public system is twice the size. In Greater Toronto, nine of the top 20 schools are Catholic.

Not surprisingly, Catholic schools are popular with much of the public. Plenty of non-Catholic parents send their kids to them because of the discipline, the academics, and even – horror – the values. Instead of trying to shut them down, we should be trying to figure out how they get such good results.

Ironically, though, plenty of parents who choose to send their kids to Catholic schools – presumably because they offer better education – are now demanding to have their kids exempted from the Catholic part.

One is Oliver Erazo, who enrolled his son in a Catholic school because it ranks higher than the other public schools nearby. When the school insisted that his son participate in some (not all) of the religious programs, he took the school to court. In April, the court ruled in his favour. "The court's decision means my family will no longer have to [live] with this prolonged anguish we have been put through any longer," he said. The ruling was widely hailed as a triumph for human rights.

Now, not surprisingly, Catholic students are demanding the same rights as the others. The schools are holding out, but for how long is anybody's guess.

Interestingly, the parents who want their kids excused from religion class are not particularly anti-clerical. They just think that stuff is a waste of time – they want their kids doing more course work. The hope is that they will get better marks and get into better universities and beat out the kids who are stuck in religious class.

Ontario's Catholic school arrangement is plainly unfair to other denominations. To be consistent, the province should either defund the Catholics or extend funding to other faith-based schools. But neither of these things is going to happen. The Catholic school arrangement, like the Senate, is protected under the Constitution and so extremely hard to alter. The public is allergic to more faith-based funding. And that leaves one alternative, which is to strip Catholic schools of the things that make them Catholic. Thus the drive to exempt kids from religion class, to force the schools to hire non-Catholic teachers (so far unsuccessful) and to accept gay-straight alliance student groups (big success).

Yet we'd be a lot worse off without these schools. They keep the system competitive. And if they didn't offer value, they would disappear. "Maybe they're more selective, or maybe Catholic schools just try harder because they know parents can always switch their kids to the public system," economics professor David Johnson, author of the C.D. Howe schools study, told the Toronto Star.

As for the argument that the rest of us are forced to subsidize the Catholic system? Actually, we don't. They pay taxes, too.

What would happen if we just had One Big System, as a lot of people want? Education critic Malkin Dare has no doubt.

"If Ontario public schools had an absolute monopoly, they would become even more unresponsive, inefficient, and expensive than they are at present," she wrote recently at the Huffington Post. Ironically, the strongest advocates of One Big System tend to be upper-middle-class parents – the ones who are most likely to opt out of it. Less-affluent parents are stuck with far less choice, and the end of the Catholic system would leave them at an even bigger disadvantage.

The irrational attack on Catholic schools isn't just in Canada. They're under siege in other secular countries, too.

And it's not just Catholics who have people spooked. Trinity Western, a small, private Christian university in British Columbia, is thought to be so threatening to the public interest that its law graduates – if there ever are any – will be too tainted to practise law in most of Canada.

Good grief, people. Where is our cultural confidence? We love to brag about our tolerance and diversity. We're not threatened by people from far away practising their faith – but along comes a Christian and we shriek in horror. It wouldn't kill us to practise what we preach. 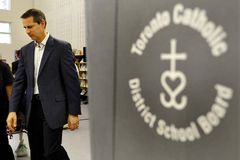 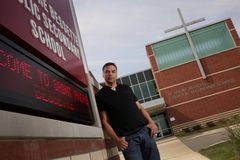