Courageous is not the first word most people would use to describe Bernard Drainville's decision to drop out of the Parti Québécois leadership race, even if that is what leader-in-waiting Pierre Karl Péladeau rushed to call it. Mr. Drainville's move was really just an act of self-preservation in the face of pending humiliation and pariah status within his own party.

The most stunning aspect of the PQ race is the degree to which the members of a purportedly social democratic party are willing to ignore all of the risks inherent in electing a leader at odds with everything they stand for, except, of course, Quebec independence. Those in the party who have sought to point out those risks have been beaten down and booed out of the room.

Not more than five days before throwing in the towel, Mr. Drainville warned party members against "the temptation of latching on to a saviour" who might turn out to be "a mirage." That earned him such opprobrium within the party that he was tearfully forced to abandon his life's dream and swear allegiance to his soon-to-crowned king.

There was no ceremonial show of unity, mind you. Mr. Drainville and Mr. Péladeau did not even appear together for a photo op. After conceding he was fighting a lost cause, Mr. Drainville strained credulity by calling Mr. Péladeau a "team player." But the sudden flurry of praise toward his former adversary may have been his only chance at a future in a Péladeau-led PQ.

This isn't the first time the PQ has given a free pass to a designated saviour. Lucien Bouchard – who also leaned far to the right of the party he ended up leading – received a hero's welcome in 1995 only to end up clashing with a rank-and-file that could never bring itself to trust him.

That history aside, only one prospective leader is seen as possessing the force of character and star power needed to lead the current PQ out of the desert. Party supporters overwhelmingly believe Mr. Péladeau when he says he entered politics "to make Quebec a country." And they're not about to throw away what many see as the PQ's last chance at the promised land.

No matter that the multimillionaire media mogul has a long history of antagonizing organized labour, arguably the PQ's most important constituency. No matter that he flip-flops at his leisure. No matter that his abrasive temperament and tendency to fly off the handle would appear to make him a bad fit for politics.

No matter, either, that his position on a future referendum is as clear as mud, something Mr. Drainville tried in vain to point out. Discussing the timing and mechanics of another sovereignty vote is a minefield for the PQ. Unless Mr. Péladeau can lay down the law, the issue will suck up all the oxygen and tear the party apart.

For now, most Péquistes are willing to cut him all the slack he needs. He's winning their hearts in other ways.

Mr. Péladeau further alienated ethnic Quebeckers by saying, in March, that "with demography and immigration, it's certain [the PQ is] losing a riding a year." The comment, which he retracted the next day, was decried as a major gaffe. But, truth be told, it resonated with the PQ rank-and-file, its intended audience. Mr. Péladeau was merely seen as stating the obvious and, as such, reassured hardline sovereigntists who dominate the base that he's in just as big a hurry as they are.

Mr. Péladeau insists he has three years before the next election to convince Quebeckers "of the benefits of independence." The first order of business, he says, is wooing back to the PQ all the sovereigntists who've parked their votes with Québec Solidaire and the Coalition Avenir Québec.

Polls taken earlier this year showed that a Péladeau-led PQ would eat deeply into CAQ support to overtake the Liberals. A CROP poll last week suggested that is no longer quite as true. But there is no doubt Mr. Péladeau stands a better chance at winning over a typical CAQ voter, who leans right on the economy and identity issues, than a far-left Québec Solidaire sympathizer.

A bigger question is whether Mr. Péladeau can avoid the internecine warfare that doomed every other PQ leader. For now, most Péquistes are too much in his thrall to even go there. Mr. Drainville has the scars to prove it. 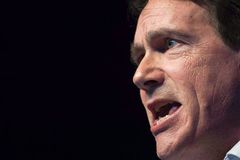 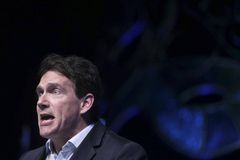