In the wake of the deadly attacks in Brussels, the world has come to realize that the capital of Europe is also the European capital of Islamist terrorism.

A few kilometres from the glittering downtown and the sprawling institutions of the European Union, a cluster of districts is home to a destitute population, mostly originating from Morocco, where up to 60 per cent of the youth are unemployed and easily drawn to a life of petty crime.

This is the breeding ground for Islamic State jihadis in Belgium. This is where the Brussels massacres and the November attacks in Paris were apparently planned. Belgium is one of the main European gateways for illegal arms. But this is only one of the reasons why it has become the hotbed of Islamist violence.

Terrorism often grows in failed or unstable states and this is what Belgium is, politically speaking. During 2010 and 2011, it was without a central government for 18 months, because no coalition was possible. It takes only two hours to cross Belgium but the country has a multitude of political parties, all divided along linguistic and ideological lines, with the result that the police forces, also divided along the same lines, are famously inefficient.

Belgium suffers from a centuries-old feud between the Flemings in the north, who speak Flemish, a Dutch dialect; and the French-speaking Walloons in the south. Their animosity makes Canada's linguistic quarrels look like a garden party.

The Flemings are fed up with what they see as "paying for the Walloons," and haven't forgotten how the Walloons despised them when the southern part of the country was thriving. Then the old Wallonian mining industries collapsed, and the Flemish majority became rich and prosperous. After years of conflict, a tentative peace was established by the division of the country into two linguistic zones, with a special bilingual status for Brussels.

The two groups would have parted ways long ago were it not for Brussels, the common treasure that cannot be divided because the city is in the Flemish zone but its population is mostly francophone. Hardline Walloons, however, will tell you the Brussels francophones are not "real Walloons" because they are too close to the Flemings. And Flemings who can speak French will refuse to address you in French if they think you're a Walloon (they'll switch to French when told you are a Quebecker).

While Belgian political life was so focused on linguistic tensions, nobody paid much attention to the third group – immigrants who live in a kind of "factual apartheid," as essayist David Van Reybrouck wrote in Le Monde. In the Brussels region, he notes, "there are 19 urban communities, one central government, one parliament and two 'mini-parliaments,' one for the Walloons and one for the Flemings." And six police forces that don't work together.

No wonder that Salah Abdeslam, the sole surviving Paris attacker, could hide for almost four months in Molenbeek, his home district in Brussels, until his arrest, which happened by chance in the course of a routine search. The police in Malines, a Brussels suburb, knew his address but hadn't transmitted it to the federal anti-terrorist squad.

Another terrorist, Ibrahim el-Bakraoui, was arrested at the Syrian border by Turkish forces last year and sent back to Belgium via Amsterdam, but Belgian police didn't follow up even though he was on parole from a Belgian prison. Last week, he blew himself up in the deadly attack at the Brussels airport.

Opinion
Three European crises, and no threads to connect them
March 26, 2016

Opinion
Musings about the randomness of tragedy in the wake of Brussels
March 25, 2016 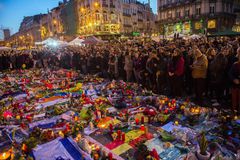