Last month, President Barack Obama grimly joked about the widespread assumption that, thanks to Donald Trump, the Republican convention in Cleveland would be violent. "The guy wanted to give his hotel business a boost," Mr. Obama said, "and now we're praying that Cleveland makes it through July."

Today, however, it is the Democratic convention that seems bound for turmoil. Soon after Mr. Obama's speech, Mr. Trump's opponents quit and Republican politicians who swore they would never support him started singing his praises. The GOP has fallen in line while the Democratic Party falls apart.

There is almost no chance that Hillary Clinton, having won the most delegates and the pledges of superdelegates, will not be the Democratic presidential candidate. This makes no difference to Bernie Sanders, who has vowed to fight until he wins. The bitter race between the two exposes and exacerbates fractures among left-leaning Americans and their relationship to the Democratic Party.

Until last year, Mr. Sanders was not a Democrat. He was an independent, making him part of the country's new political majority. Since 2008, the number of independents has risen to 43 per cent from 35 per cent, indicating frustration with partisan politics and leaders' inability to fix an economy still reeling from the recession.

Mr. Sanders did not create the antipathy toward the Democratic Party, but he reflects it and capitalizes on it.

The results of the Democratic primaries, however, have revealed a disturbing trend. It is easy to predict whether Mr. Sanders or Ms. Clinton will win a state. You only need to look at the state's percentage of black voters. If the number is higher than 10 per cent, the state will go to Ms. Clinton. If the number is less than 10 per cent, it will go to Mr. Sanders. The fewer black voters in the state, the higher his margin of victory usually is. Only four states have bucked this pattern: Iowa, Michigan, Kentucky and Arizona, where Ms. Clinton won largely due to Latino voters.

This racial divide is unprecedented in primary history. It is much starker than the 2008 contest between Ms. Clinton and Mr. Obama, where Mr. Obama won not only the heavily black south but also whiter, rural states. His diverse coalition included enthusiastic black, Latino, female and young voters of all classes. In most primaries this time around, Ms. Clinton tends to win every demographic group but two: white men of all ages and white youth, the latter of which vote overwhelmingly for Mr. Sanders.

The Sanders campaign has made a number of controversial statements about black voters, from describing southern states where black Democrats voted for Ms. Clinton as "the Confederacy," to implying that black people live in "ghettos," antagonizing black intellectuals with patronizing comments, and separating black voters from the "working-class people" whose interests Mr. Sanders claims to champion.

This latter belief, first articulated in 2014, is one of the most troubling aspects of Mr. Sanders's campaign, as it dovetails with the overtly racist rhetoric of Mr. Trump, who is courting Mr. Sanders's fans. Instead of reaching out to diverse voters, Mr. Sanders argues that he is a stronger candidate to beat Mr. Trump based on polls that show his white support.

Like Mr. Trump, Mr. Sanders portrays the Democratic Party as an "establishment" enemy, and like Mr. Trump, he has elements in his fan base who issue death threats to party representatives, usually women. In February, Mr. Sanders condemned the threats, saying that fans who made them were not wanted. This week he responded differently to the threats his fans made, discouraging them but blaming the Democratic Party's Nevada caucus vote (which he lost) for inspiring them.

In a May 17 speech, Mr. Sanders criticized the Democratic Party while his fans chanted "Bernie or bust." It is unlikely that Ms. Clinton, a career Democrat linked to corporate interests, will receive the passionate endorsement from Mr. Sanders that she gave to Mr. Obama in 2008.

Mr. Sanders has brought much needed focus on movements for higher wages, free education and the end of corporate corruption. These grassroots movements predated his campaign, and will continue without him. But it is uncertain what kind of environment the activists fighting for these causes will face. 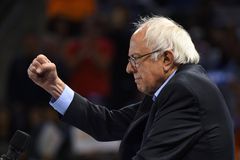 Fearing Trump, some Democrats up pressure on Sanders to exit
May 13, 2016