Should speech rights be restricted by people's feelings?

A lot of people think so – especially on university campuses. Consider Wilfrid Laurier University, a middle-tier institution that draws its students from Southern Ontario. It's not exactly a hotbed of student radicalism. Yet when Danielle Robitaille was invited to address the Criminology Student Association conference earlier this month at the school's Brantford campus, all hell broke out.

Ms. Robitaille was on the legal team that defended Jian Ghomeshi, the acquitted former radio star who seems to have traumatized a good part of the nation. For that reason, according to a small but vocal group of students, her appearance on campus would be traumatizing to sexual-assault survivors. Sarah Scanlon, Laurier's sexual-violence support advocate, vigorously agreed. She warned that the very invitation had been triggering, and held a "safe space" meeting for those who wished to share their pain.

These incidents are becoming common. Last Friday, Jordan Peterson, the now famous University of Toronto professor, was shouted down at McMaster University for attempting to express the dangerous idea that gender is biological, rather than socially constructed. (To be fair, he got a warm welcome at Western University.) Three weeks ago, an angry mob shut down a talk by conservative scholar Charles Murray at the elite Middlebury College in Vermont, and injured a professor in the melee.

"The range of what is permissible to say on campus has become smaller and smaller," says David Haskell, a Laurier journalism professor, who wrote an opinion piece calling the furor over Ms. Robitaille "another nail … pounded into the coffin of free speech."

The flight from free speech is no accident. In fact, it is rooted in ideas that have spread like invasive weeds and strangled most of the liberal arts. These ideas were advanced by Herbert Marcuse, Theodor Adorno and other Marxist intellectuals who argued that Western civilization must be overthrown because it allows systemic inequality to persist. Mr. Marcuse's essay on "repressive tolerance" argues that intolerance toward privileged groups is perfectly acceptable to achieve a tolerant and fair society. In other words, our duty is to oppress the oppressors.

It follows that free speech – far from being the bedrock of a fair and just society – is illegitimate and even dangerous when the oppressive class uses it to hold on to power. The student group that protested Prof. Peterson's appearance at McMaster made this point explicitly. "Freedom of speech was … not conceived as a means to protect normative ideas from contestation by marginalized communities," it said. In other words: The overclass has no right to speak. Only their victims do.

One reason more professors don't speak up is that a substantial number of them endorse these views. That's how the students got them. "Universities are all for diversity," Prof. Haskell says. "But we won't embrace viewpoint diversity."

Judging from Wilfrid Laurier's home page, its main mission is to turn its nice middle-class students into social-justice warriors who will go to battle with our sexist, racist, patriarchal and hideously unjust society.

Why doesn't the university leadership stand up to this bullying? Simple. They can't afford to rile the faculty. Most universities are structured so that the faculty have enormous power but almost no accountability. Just by threatening to go on strike, they can make the president's life a living hell.

The Wilfrid Laurier administration's response to the Robitaille affair tells you everything you need to know about institutional timidity these days. It issued two simultaneous press releases: one that guardedly (very guardedly) endorsed the principle of free speech, and one that vowed to shelter the students from the trauma of free speech, should it actually occur. "In accordance with our gendered violence policy and procedures," it said, "we encouraged our staff to ensure that supports were available to individuals who have been impacted by gendered and sexual violence."

Universities used to be about dangerous ideas. Now they're about social work. You'd have to laugh, if it weren't so sad.

Opinion
A lesson for Milo Yiannopoulos in what free speech really means
February 25, 2017 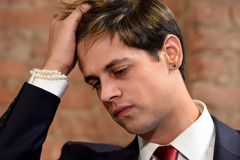 Opinion
M-103: Canadian Muslims need this showing of solidarity
February 19, 2017
Opinion
A motion to quell anti-Muslim hate shouldn’t be up for debate, but here we are
February 17, 2017
Follow us on Twitter @globedebate Opens in a new window
Report an error Editorial code of conduct
Due to technical reasons, we have temporarily removed commenting from our articles. We hope to have this fixed soon. Thank you for your patience. If you are looking to give feedback on our new site, please send it along to feedback@globeandmail.com. If you want to write a letter to the editor, please forward to letters@globeandmail.com.
Comments