Vladimir Kara-Murza, a long-time colleague of Boris Nemtsov, is deputy leader of the People's Freedom Party and national co-ordinator of the Open Russia movement. He lives in Moscow.

In February, 2012, Boris Nemtsov, the leader of Russia's pro-democracy opposition, visited Canada to draw attention to the dire situation in our country.

In his speeches and in meetings with MPs, Mr. Nemtsov spoke about election fraud, media censorship and political repression that have become part of everyday life in Vladimir Putin's Russia. He urged Canada to be "honest and frank" about these issues.

Since then, the situation has become worse.

Elections are a meaningless ritual for confirming the incumbents, with opposition candidates routinely disqualified from the ballot and the voting process marked by intimidation and fraud.

All of Russia's nationwide television channels are under Kremlin control and are used as propaganda tools to rail against "external enemies" – such as Western countries and Ukraine – and against Mr. Putin's political opponents inside Russia, who are denounced as "foreign agents."

Meanwhile, the number of political prisoners in Russia, according to the country's most respected human-rights group, Memorial, has reached 53.

But disqualification from the ballot, slander in state-run media and even prison are not the biggest dangers facing those who oppose President Putin.

On Feb. 27, 2015, Boris Nemtsov was killed in plain sight of the Kremlin. The assassination of Russia's most prominent and most effective opposition leader has left an enormous void in the democratic movement.

The tens of thousands of people who marched through central Moscow two weeks ago to mark the one-year anniversary of Mr. Nemtsov's death are testimony to that, as are the people who continue to bring flowers and candles to the spot where he was killed.

The official reaction could not be more different. Russian authorities have rejected a petition to commemorate Mr. Nemtsov and have refused to qualify his killing under Article 277 of the Criminal Code as an attempt on the life of a public statesman.

Although investigators have arrested the alleged perpetrators of the crime, they have been unable – or unwilling – to pursue the organizers and masterminds. Despite the obvious links of the accused perpetrators to Kremlin-appointed Chechen leader Ramzan Kadyrov, he has not been questioned and continues to issue public threats against opposition leaders, such as when he recently posted a video showing former prime minister Mikhail Kasyanov and myself in the crosshairs of a sniper rifle.

Indeed, I am very fortunate to be writing this. Last May, I slipped into a coma after severe poisoning of unidentified origins. Tests showed an abnormally high concentration of heavy metals in my blood. Medical experts estimated my chances of survival at 5 per cent. I have little doubt that this was a deliberate poisoning, motivated by my political activities, and that it was intended to kill.

During that same visit in 2012, Mr. Nemtsov called on MPs to adopt the Canadian version of the Magnitsky Act, a U.S. law that laid a groundbreaking precedent by introducing personal accountability for human-rights abuses.

It imposed visa sanctions and asset freezes on people implicated in the arrest, torture and death of Sergei Magnitsky, a Moscow lawyer who uncovered a $230-million (U.S.) tax fraud scheme involving Russian state officials, and in other human-rights abuses.

For all the similarities between the Soviet era and present-day Russia, there is one major difference. While members of the Soviet Politburo were silencing dissent and persecuting opponents, they did not store their money, educate their children or buy real estate in the West. Many of the current officials and Kremlin-connected oligarchs do.

This double standard must end. Those who trample on the most basic norms of the free world should not enjoy the privileges the free world has to offer. 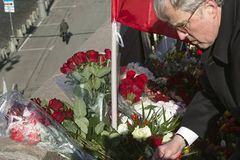 Chechnya's strongman says he is willing to step down
May 16, 2018
Follow us on Twitter @globedebate Opens in a new window
Report an error
Due to technical reasons, we have temporarily removed commenting from our articles. We hope to have this fixed soon. Thank you for your patience. If you are looking to give feedback on our new site, please send it along to feedback@globeandmail.com. If you want to write a letter to the editor, please forward to letters@globeandmail.com.
Comments