Mark Milke is a Calgary based author.

It is time to demolish a nonsensical myth from last year that will no doubt reappear in this one: That a values test for would-be settlers in our peaceable kingdom would constitute prejudice.

Actually, it would be a reflection of the necessity to unite around laudable ideas. It would be in contradistinction to countries where ethnicity or religion matter to citizenship, but not what is in one's head.

My bias: I favour immigration for economic reasons and because it helps invigorate a nation, treating it as a living organism and not as a dead trophy.

Catherine Clark: Canadian values drive us together, not apart

Margaret Wente: How much diversity do Canadians want?

As a practical matter, a values test of the sort proposed by Conservative Party leadership contender Kellie Leitch last year may or may not work. Also, Ms. Leitch is nakedly ambitious; she endorsed a "snitch line" last year, a nod to George Orwell's 1984. So she is a less-than-ideal vehicle for discussions on citizenship.

Ms. Leitch aside, to think clearly about Canadian values, consider that there are really only two types of countries: nation-states where citizenship is based on ethnicity (Japan, for example) or religion (Saudi Arabia); and countries based on a shared set of ideas and ideals – France (liberty, equality and fraternity), the United States (life, liberty and the pursuit of happiness), Canada (peace, order and good government).

Canada's credo is not robustly "idea obvious," but it is derived from British and French influences and thus includes assumptions about freedom, the rule of law, the necessary division of power and so forth.

To place these ideas at the pinnacle of a country's self-understanding means anyone is potentially welcome – provided they commit to the ideas and the norms that flow from them: freedom of speech and religion, property rights, the equality of individuals before the law. Anyone can rally to these; it matters little whether one was born in Buffalo, Beijing, Beirut or Barrie.

Critically, and however imperfectly, countries that practise civic-based citizenship are able to integrate and unite otherwise diverse peoples if the focus is kept on shared, defensible concepts. They run into trouble when they forget that or pretend that all ideas are created alike.

But this assumes a robust defence of desirable norms and a frank hostility to cultural or religious practices that, for instance, subjugate women.

This also has ramifications for immigration and the unrealistic assumption that any potential applicant will eventually integrate and accept existing Canadian norms. (For those who glibly believe this, invite 10 million Texans who believe in the right to bear arms to settle in Toronto, then see if policy discussions and voting patterns are not permanently affected.)

None of this means Canada should end immigration from certain countries. It means being realistic about who is likely to integrate and who will not: A young female physician from Islamabad who wishes to escape oppressive cultural and religious assumptions should be welcome; a 60-year-old village elder from Kohistan in northwestern Pakistan, where five girls were reportedly killed for dancing, probably not.

The least we can do is insist that certain Canadian norms do matter – and without apology.

This is why Justin Trudeau, then the Liberal immigration critic, was wrong to shy away from revisions to Canada's citizenship guide in 2011 that read: "Canada's openness and generosity do not extend to barbaric cultural practices that tolerate spousal abuse, 'honour killings,' female genital mutilation, forced marriage or other gender-based violence." Mr. Trudeau objected to the term "barbaric." He argued that a government guide should make an "attempt at responsible neutrality" in language, a position he later backed away from.

Unite around laudable ideas and people will be less likely to fall into the abyss of division created by irreconcilable and unchangeable characteristics. 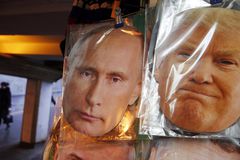 Opinion
Kellie Leitch misses the point about immigration
November 11, 2016
Opinion
Canadian values drive us together, not apart
November 14, 2016
Opinion
Not in Canadian court: Trump ‘values’ - nor a Trump hat
November 14, 2016
Follow us on Twitter @globedebate Opens in a new window
Report an error
Due to technical reasons, we have temporarily removed commenting from our articles. We hope to have this fixed soon. Thank you for your patience. If you are looking to give feedback on our new site, please send it along to feedback@globeandmail.com. If you want to write a letter to the editor, please forward to letters@globeandmail.com.
Comments