Heritage Minister Shelly Glover rose in the House of Commons this week to deliver another of the Harper government's directives to the public broadcaster it's accused of slowly killing.

"CBC/Radio-Canada is attracting fewer viewers than before, despite the fact that it is receiving more than $1-billion in direct subsidies from taxpayers each year," Ms. Glover said. "The changes [at the CBC] are a result of that decrease. It's up to CBC/Radio-Canada to deal with it."

"Changes" in this case is a euphemism for cuts, including the 400-plus pink slips the bleeding public broadcaster issued to employees just last week. Ms. Glover's not-so-subtle message to the CBC's executives is simple: Boost your ratings or suffer the consequences.

It's easy to understand why the Harper government would want the CBC, an institution it deeply distrusts, to play the ratings game. That would require the broadcaster to further emphasize its Broadcasting Act mandate to "entertain" Canadians, while de-emphasizing its responsibility to "enlighten" and "inform" them.

One senses that the Conservatives would be perfectly happy to see the CBC gut its news operations and spend what's left of its scarce cash feeding opium to the masses in the form of inoffensive and (especially) apolitical entertainment. The Tories are fine with a broadcaster that dishes up wholesome servings of Murdoch Mysteries. Smart reporting on politics and policy, not so much.

"My view is simply that I find the CBC – and I'll be blunt – has too much news, too much sports, too much Olympics," Conservative Senator Leo Housakos recently told a Senate committee holding cross-country hearings into the future of the public broadcaster. "They can't get ratings. So if they can't get ratings, they can't get revenue. They eat up the budget they're getting from taxpayers, and that budget, in my view, is there to promote Canadian content."

Tory Senator Donald Plett questioned whether the CBC even needs foreign correspondents: "We have a situation in Africa with the Ebola crisis and we have a situation in the Middle East with ISIL. All the major networks are there. Is it necessary for the CBC to be there? Quite frankly, if I want to know what's happening in Syria, I can go to CTV or Global and find out."

The Conservatives are hardly novel in detecting an unfavourable bias in the CBC's news coverage. Practically since the broadcaster's creation in 1936, governments of the day have quietly suspected the socialists, separatists, environmentalists and opportunists at the CBC of being out to get them. Stephen Harper's Conservatives are just more open about their paranoia.

Alain Saulnier, former news director at the CBC's French pendant Radio-Canada, has written in a new book that he was bawled out by Tory-appointed board directors shortly after the 2011 election for the network's "biased" campaign coverage. CBC chairman Rémi Racine told Mr. Saulnier he was "embarrassed" watching Radio-Canada's election-night broadcast.

During the 2008 election campaign, Mr. Saulnier says he received "regular" missives from Harper press secretary Dimitri Soudas complaining about news reports. In one such note, Mr. Soudas said some reports "seem relatively sympathetic to other parties rather than presenting information in a factual manner." He went on to provide a list of the offending reports.

CBC types usually hit the ceiling at suggestions the network's news coverage fails to run the bases of accuracy, fairness, balance, impartiality and integrity, as the broadcaster's own code of journalistic standards and practices proposes. But even if certain biases pervade everything the network does – reporters aren't yet robots, after all – political intimidation is beyond the pale.

CBC President Hubert Lacroix, accused of being Mr. Harper's chosen henchman, pushed back this week against the "conspiracy theories, insinuations of political pressure, made-up stories to discredit our leadership [and] personal attacks" directed at him and the board in the wake of Mr. Saulnier's book and the massive round of $130-million in budget cuts unleashed in April.

But as long as Mr. Lacroix, with board approval, pursues a strategy of trying to do as much or more with less, he is complicit in the undermining of the CBC's vital news operations. Its shrinking resources are stretched too thinly among dramatic, reality, sports and public-affairs programming on multiple platforms. That means it does nothing, including the news, as well as it could or should.

And you don't need to watch an episode of Murdoch Mysteries to figure out whodunnit.

Opinion
The CBC I know is the best kind of workplace
November 19, 2014 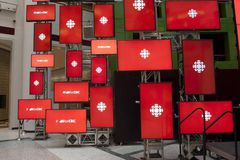