As photos of violent clashes between the military and protesters emerged from Egypt this week, shocked observers were forced to consider: Was this a bloody end to dreams of an Arab Spring? As Egypt goes, wisdom has it, so goes the region. Certainly, the ousting of president Hosni Mubarak two years ago helped spark uprisings across the Middle East. And now, as the Egyptian military fights what it claims is a war against Islamic terrorists, other countries are also concerned about religious parties' effect on calls for change.

But perhaps the question isn't whether these events signal the failure of democracy, but whether we've been witnessing a call for a revolution of a different kind. Globe and Mail global-affairs writer Patrick Martin and Karim Alrawi, a playwright and former spokesman for the Egyptian Organization for Human Rights, now at the University of British Columbia, decode the news.

Patrick Martin: I was in Cairo for the so-called Arab Spring. There were popular protests – mostly by young people – calling for an end to autocracy. And that uprising did carry over to Tunisia and Yemen and beyond. What I think is often misunderstood is that there was no "pan-Arab" movement, no mass call for a single ideal of democracy or liberalism.

Karim Alrawi: I agree: To class these different events under one heading probably disguises more than it illuminates. There were uprisings with specific demands that varied from country to country – as did the means for achieving those demands.

If you are asking whether these protests led to real change, though, I do think we can see some common elements. We've seen a change in people's attitudes to power and their relationship to each other. In many cases, those changes are for the better, but not in every case. One reading of this week would be that the region is in a state of collapse, but another is that it is still in the process of remaking itself for the better. It is probably too early to be certain just yet which it is.

PM: Some things have changed less than we might think, though. Because these protests wouldn't have displaced any government unless there was support from the military. In Egypt, for example, the military used the 2011 uprising to get rid of a president who had become a liability. The army played at democracy for a while, but only until they encountered another leader, Mohamed Morsi, who they saw as unwilling to support the armed forces' behind-the-scenes control – at which point they seized control again. In many ways, the army has been the power all along.

KA: I do believe the military thought they had a partner in the Muslim Brotherhood. But the force this week wasn't only a response to their disappointment. The mismanagement of the economy turned so many citizens against the Brotherhood that the military had to do something – don't underestimate the fear of chaos that accompanies the sight of millions of people on the streets demanding change.

Also, there is a lot of catching up that needs to happen at all sorts of levels for democracy to strengthen and grow in the Middle East. I often feel the region is like an archeological site, with institutions that were founded an age ago but never developed to cope with the demands of the modern world.

That has to begin somewhere, don't you think?

PM: Yes, and that fear of chaos you mention can be a stronger driving force than the desire for democracy. To many people in Egypt, Yemen, even Syria and Jordan, democracy has turned out to be a luxury they can ill afford. Despite the 2011 revolutions, they are still just trying to establish order and stability – as well as steady incomes (however meagre) and a chance for their children to live better lives.

It is easier to protest against a leader in office than it is to build democratic institutions. Most of the young liberals who started the protests in 2011 didn't have the stomach for the hard work of launching political parties and organizations of civil society that would reach out to the poor and unempowered. I think some of them are actually more comfortable with the army in charge.

KA: I definitely agree that the uprising in Egypt lacks leadership, which is why nothing has developed beyond the present stage and there is a gap that the military believes itself capable of filling. And it's true that economics, not politics, is the driving force for change. We have a young, educated middle class that feels constricted and wants a say in how they live their lives, but also a large portion of the population suffering from the global economic downturn and rising food prices.

Where the military is concerned, the question is whether they choose to become part of the solution. To do that, they'd need, as a first step, to enforce the rule of law. It is unclear that they understand that given the way the protests by the Brotherhood were dealt with this week.

PM: Back to the liberals for a moment. Their ideals were front and centre during the so-called Arab Spring. Now they seem to have fallen in step with the military.

KM: It appears to be the case in Egypt for the moment. If the Brotherhood had been more open to compromise and less ideologically sectarian, they may have introduced some competent economists into their government instead of driving the country to near bankruptcy. In which case, I would argue they'd still be in power. Instead, every time something went wrong through mismanagement, they blamed the old regime or claimed it was Western perfidy and a Christian conspiracy.

Not everybody will buy that – and if they do, not for long. The liberals have the technocrats on their side and should be able to start fixing the economy, but right now they depend on the military. Because the risk is that the Islamists, specifically the Muslim Brotherhood, will resort to even more violence.

PM: Yes, that organization has also been rendered leaderless – the upper echelon is locked up – and the troops are very angry and inexperienced. I also think the situation is exacerbated by Libya: There are a lot of weapons and a great many Islamists who could flow across the border, and little law and order to prevent it.

Also, from Brotherhood websites calling on supporters to sacrifice themselves and their opponents exhibiting high levels of anxiety in their own networks, I can only imagine some very bloody days ahead for Egypt.

This discussion has been edited and condensed. 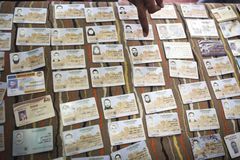 The military’s massacre of peaceful protesters has taken Egypt to the brink
August 15, 2013 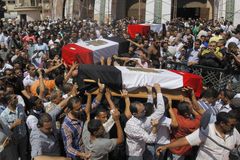