Tanya Harrison
Contributed to The Globe and Mail
Published September 29, 2015 Updated May 15, 2018

Tanya Harrison is a former science operations team member for NASA's Mars Reconnaissance Orbiter and the Curiosity rover. She is a doctoral candidate at the Centre for Planetary Science and Exploration, University of Western Ontario.

Why does anyone care about what's happening on Mars when there's so much to worry about here on Earth? Why do we continue to spend a lot of time and a lot of money finding out more about that distant red planet? What's the big deal?

A fair question – and one that I hear a lot, as a planetary geologist. The fascination is apparent, everywhere you look: The media is ablaze with the "breaking news" headlines of Monday's announcement of flowing water on Mars's surface. The movie The Martian has been receiving accolades left and right. And let's not forget, tens of thousands of people signed up without hesitation for the chance at a one-way trip to Mars.

So – the big deal. For most, it's the search for an answer to this persistent, currently unanswerable question: Are we alone in the universe?

Humanity's fascination with Mars revolves around the search for life. In the late 19th and early 20th centuries, Percival Lowell championed the idea that Mars was inhabited by intelligent beings. This was based on his telescopic observation of canals across its surface. While the scientific community did not heavily support his observations, popular culture latched onto them. Lowell's canals influenced science fiction, with books such as H.G. Wells's The War of the Worlds and Ray Bradbury's The Martian Chronicles among the many novels that include the canals in their story lines. (As family genes would have it, a cousin of mine in 1903 published a short story about travelling to Mars, titled A Trip to Mars: Incidents by the Way.)

When we started sending space probes to study Mars in the 1960s, the world waited with bated breath to see – and would ultimately be disappointed by – what life forms would be revealed (or not). Since then, we have lobbed a whole host of robots at the red planet in the hopes of discovering whether it harboured microbial life in the past – or, more excitingly, the present. And while there's no denying that water on Mars is a ground-breakingly important discovery, it's not as exciting as making first contact with an alien species.

Mars fascinates me for different reasons. When I was a preteen, NASA released an animated GIF of the little Sojourner rover driving off the Pathfinder lander and onto the planet's surface. I was enthralled. We had the ability to build a robot, stick it on top of a rocket and aim it at a moving target 225 million kilometres away, and then drive it around and explore.

Exploration in general has long been the fuel for technological advancement, from the development of precision navigation methods by nautical explorers to NASA-developed technologies ranging from home insulation to kidney dialysis. Exploration drives us to innovate.

Think about it: We can target lasers to shoot rocks on Mars, within a few millimetres of accuracy. We're shooting lasers at rocks. On another planet. I study the geology of the planet every day – and even still, that is an amazing, mind-boggling feat of technology.

Beyond all of the scientific aspirations and the search for life, there is this: Mars is at once a relatively unexplored yet reachable frontier. It is humanity's pioneering spirit. And perhaps – if you'll allow me a little Star Trek – it's a frontier where we can come together, united as a species to explore, as we gain a better perspective on our place in the cosmos.

Patch of Mars named after another famous cold place: Winnipeg
May 15, 2018 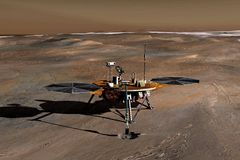