Michael Adams is president of the Environics Institute and author of Could It Happen Here? Canada in the Age of Trump and Brexit.

Cultures have their own myths, institutions and trajectories. Some things have changed in America, as in other societies: slavery was abolished, women got the vote, same-sex marriage was allowed.

As for guns, I don't believe significant change is imminent, even if some Americans – especially young ones – are growing weary of mass shootings, defined as incidents where four or more people are injured or killed, of which the United States had 346 last year. (Canada had one such horror: the Quebec City mosque shooting.)

Guns are deeply embedded in American life and identity. They are enshrined in the Constitution – or at least in many Americans' and the Supreme Court's reading of the Second Amendment. According to Pew Research Center polls, three-quarters of gun owners (74 per cent) say owning a gun is essential to their personal freedom, and two-thirds (67 per cent) say they own a gun for protection.

Guns are also deeply embedded in American culture. In U.S. cultural products, good guys kill bad guys with guns – whether they're in the Wild West, in U.S. cities, in foreign wars, or in outer space. My bet is that America in the years to come will continue to have a few gun-free zones, such as airplanes, sports stadiums and Republican Party conventions. But places explicitly free of guns – or "soft targets" as U.S. President Donald Trump has framed them – will become fewer. Beyond these enclaves, you could encounter someone with a weapon, concealed or brandished, almost any time and anywhere.

I suspect the argument of arming good guys to kill bad guys will triumph over the idea of limiting the types of weapons available to ordinary citizens. A "good guy with a gun" is a familiar American cultural trope; a guy who voluntarily disarms himself because he's persuaded by quantitative evidence in international perspective, not so much.

At present, President Trump and gun advocates are musing about programs to arm someone (a teacher, security guard, retired military or reservist) in every public school in the United States, and perhaps on college and university campuses. If implemented and popular, such programs could be extended to any place where Americans congregate: churches, casinos, shopping centres.

Other measures may be proposed around the edges, such as raising the age when a gun may be purchased, modest improvements to security checks for gun buyers, temporary suspensions of gun licences when gun owners are demonstrably in crisis, and maybe restrictions on automatic weapons or extras like bump stocks.

Retrieving the hundreds of millions of weapons already out there in American households? Forget it. In a recent joint appearance, Mr. Trump and Australian Prime Minister Malcolm Turnbull agreed that a government buyback program that removed 650,000 guns from circulation in Australia is implausible in the American context. In an op-ed, Australian commentator A. Odysseus Patrick agreed. Not only are Australia's laws and history different from America's, he argued, but Australians do not attach the same meaning to their guns that American do – either as personal protection or as symbols and guarantors of political freedom.

I'm doubtful that anything will be done about the rage, hatred and mental illness in a stressed-out society where so many economically displaced and status-anxious people feel they're on the losing end of the greatest country on earth – and want revenge.

Putting in place new programs for collective security? Again, forget it. A meddling government means liberalism, socialism, communism – or all of the above. It's un-American. Ronald Reagan told America that government is the problem, not the solution, and most Americans still believe him.

Canadians witnessing gunfights, thrilling to some on a movie screen, terrifying to nearly everyone when reported on the news, must be anything but smug. We are far from perfect. We have plenty of legal and illegal guns here too. These guns kill many Canadians, including about a third of all homicide victims last year. Canada also has citizens who want guns to be more easily available and less well-documented.

But most Canadians believe in drawing on our tradition of "peace, order and good government"; surveys find support for robust gun-control measures to be strong and durable.

Support for social programs is also strong in Canada. When working well, these programs help people who feel they are the victims of social and economic change feel they may have a path forward that doesn't involve randomly wiping out a classroom of school children or people at a rock concert.

Canadian citizens who are angry about the status quo can rant online or over dinner, call talk radio, join a political party, organize a protest, or vote for candidates who represent their values.

Dissatisfaction with the way things are can make society better, but not if guns feel more easily accessible than productive ways to participate.

ANALYSIS
How guns became such a deeply ingrained part of the American identity
February 25, 2018 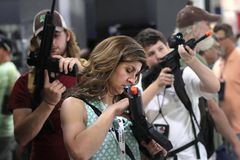 U.S. Congress to focus on background checks after Florida shooting
February 27, 2018
Trump says he’s willing to take on NRA over gun laws, but Congress not so sure
February 26, 2018
Follow us on Twitter @globedebate Opens in a new window
Report an error Editorial code of conduct
Due to technical reasons, we have temporarily removed commenting from our articles. We hope to have this fixed soon. Thank you for your patience. If you are looking to give feedback on our new site, please send it along to feedback@globeandmail.com. If you want to write a letter to the editor, please forward to letters@globeandmail.com.
Comments are closed