Bjorn Lomborg is the director of the Copenhagen Consensus Center

The UN Climate Summit in Lima achieved little, just like the previous meetings for more than 20 years. As the saying goes, "insanity is doing the same thing over and over again and expecting a different result."

For the past 20 years, the traditional climate approach has been clear and single-minded: we must subsidize the deployment of renewable sources of energy, such as wind turbines and solar cells to reduce our CO2 emissions – the so-called reduction pathway. Yet, today, after endless climate summits and good intentions, the world gets just 0.4 per cent of its energy from solar and wind power. CO2 emissions continue to rise.

Last month, the International Energy Agency issued its first prognosis for 2040. Even in the extraordinarily optimistic scenario that all governments live up to all their green promises, in 26 years, sun and wind will supply just 2.2 per cent of the world's energy. As Jim Hansen from NASA, Al Gore's climate advisor, says: "Suggesting that renewables will let us phase rapidly off fossil fuels in the United States, China, India, or the world as a whole is almost the equivalent of believing in the Easter Bunny and Tooth Fairy."

After 20 years of debate, grand promises, and pompous rhetoric, we have just 0.4 per cent of our favorite solution, and in the next 24 years we might have another 1.8 per cent. It is time to find a smarter way forward.

The basic problem is that current green energy is much too expensive. This is true in Canada, in the West and certainly in the developing world. When we graciously help poor countries with solar panels and wind turbines, it provides some benefits. But had we used gas, studies show that we could have helped four times as many people to get electricity for the same amount of money.

The problem with the current climate approach, as we saw it in Lima, is that we are trying to convince virtually all the major countries of the world to directly counteract their economic interests. Germany sacrifices more than $130-billion on solar panels that will postpone global warming at the end of the century by just 37 hours. That is a hard sell.

China has lifted 680 million people out of poverty using cheap if polluting coal, but we're asking them to slow that process down. And now we are asking developing countries to use ineffective wind and solar that will help significantly fewer of their poor citizens out of darkness and poverty.

It is little surprising that Lima failed, and if we continue on this track, Paris in 2015 will fail, too.

Fortunately, there is a much more promising alternative that doesn't depend on all countries acting directly against their economic interests: We need to increase funding for R&D of green energy tremendously. If we innovate the price of green energy down below fossil fuels, everyone will switch – even China and India.

Economic analyses suggest that if we use our resources to focus on R&D of green energy, the benefit for climate and society would reach 11 dollars for each dollar spent. Compare that to the EU's climate policy: An average of macroeconomic models indicates that the cost of EU's climate policy from 2020 and onwards toward the end of the century will be $260-billion annually, while it prevents climate costs of about $8.25-billion a year. That is doing just 3 cents of good for every dollar spent.

Lobbyists for current, ineffective renewable technologies often argue that our subsidies create precisely this innovation, creating a massive demand for green solutions, and the innovation will follow all by itself. Unfortunately, this is not the case.

A German parliamentary commission has analyzed the effects of Germany's large green venture, the so-called Energiewende. The commission unambiguously concluded that the subsidies do not create green innovation, because it is much safer for companies to keep relying on heavily subsidized wind turbines, solar panels, and biomass instead of further developing existing technologies and develop new, viable alternatives to fossil fuels. The subsidies simply create the wrong incentives, and the commission "found no positive correlation between subsidization and innovation in any technology sector."

An excellent illustration of the way progress occurs is the development of computers since the 1950s. We did not develop computers by subsidizing and mass producing vacuum tubes in the 1950s. We did not provide massive subsidies so all westerners could have a humongous computer in their basements by 1960. We also did not tax alternatives, such as typewriters. The development came singularly from a massive investment in R&D, lead by the space race, which led to transistors, integrated circuits, hard disks and all the other breakthroughs innovations that made it possible for companies like IBM and Apple to produce computers that the consumer actually wants to buy.

We know how innovation can reduce CO2 emissions. The shale gas revolution in the United States was made possible with the U.S. government spending $10-billion on R&D over the past three decades. Fracking has pushed gas prices down, replaced dirtier coal with less polluting gas and cut CO2 emissions by about 300 million tonnes in 2012. This is more than three times what EU's expensive wind turbines and solar cells cut every year. And while the EU pays about $40-billion in subsidies to solar and wind every year, the U.S. makes $280-billion annually from the shale breakthrough.

Rather than counting on the world suddenly choosing to pursue a policy that directly goes against the economic interests of everyone, the next climate summits should focus on dramatically increasing the funding of green R&D to develop the next, cheaper generations of green energy. If we innovate the price of green energy down below the price of fossil fuels, we will finally start tackling global warming. 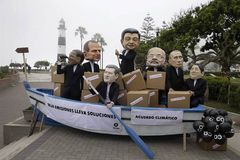