Peter McKnight is an adjunct professor in the School of Criminology at Simon Fraser University.

Recent overdose figures from the Canadian Community Epidemiology Network on Drug Use confirm one thing: Anyone who wants opiate drugs can get them.

The network's bulletin, released this week, focuses on fentanyl, a synthetic opiate about 100 times more potent than morphine. The report notes that fentanyl contributed to at least 655 Canadian deaths from 2009 to 2014 – an average of one death every three days. And in British Columbia, which has long experienced high rates of opiate use, fentanyl-detected deaths increased 700 per cent from 2012 to 2014.

Ironically, the spike in fentanyl deaths might be the direct result of a crackdown on prescription opiates, as street dealers substitute the ultra-potent substance for prescription drugs that are in short supply. So, 45 years after U.S. president Richard Nixon first declared what has become a worldwide war on drugs, opiates remain as easy as ever obtain.

But what if opiates aren't your drug of choice? What if you're looking instead for a drug that can reverse the deadly effects of opiates? Well – and here's more irony – that drug is a lot harder to get. It's called naloxone, a drug that blocks the effects of opioids in the brain, thereby reversing an overdose and preventing the loss of consciousness and cessation of breathing that often follow. A non-addictive, non-intoxicating, low-risk drug, naloxone has been used in Canadian emergency rooms for more than 40 years.

The trouble, of course, is that most people don't shoot up in hospitals. People commonly use drugs – and overdose – at home, in a washroom or in an alleyway. And if we are to reduce the risk of death or brain damage, naloxone must be available wherever and whenever an overdose occurs.

For this reason, many jurisdictions have started Take Home Naloxone programs, which provide education in administering naloxone along with a supply of the drug to opiate users or those who associate with them. These programs have met with conspicuous success: The U.S. has more than 180 such programs, and about 10,000 overdoses have been reversed. Edmonton started a program in 2005, followed by Toronto in 2011 and B.C. in 2012. Ontario has now joined B.C. with a provincewide program, with further initiatives planned for Alberta and Quebec, and these programs have replicated the success of their U.S. counterparts.

Despite this, the recent spike in fentanyl-related deaths suggests that naloxone availability remains an issue. Indeed, current regulations unnecessarily restrict the availability of naloxone. Although details differ somewhat from province to province, Take Home kits are provided only by prescription and typically are available only to opiate users who are at risk of overdose. This effectively bars family members and friends of opiate users from receiving naloxone, yet those very individuals are often in the best position to administer the drug. Similarly, there will be no naxolone for the significant number of people who are unwilling to admit that they use illicit opiate drugs.

These problems could easily be overcome by permitting over-the-counter distribution, something that has worked successfully in other jurisdictions. Health Canada has agreed to review the prescription-only status of naloxone, though the process could take up to 18 months. But it must not take 18 months. At current rates, 18 months means an additional 183 fentanyl-related overdose deaths. An additional 183 preventable overdose deaths.

We clearly have easy access to drugs that are killing us. Just as clearly, we need better access to a drug that can save us. And we need it now.

Fentanyl is killing people, so why doesn’t Ottawa say something?
August 11, 2015 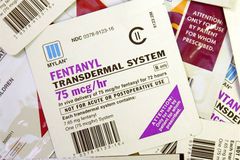