Dan Malleck is an associate professor in health sciences at Brock University and the author of When Good Drugs Go Bad.

Prescription painkiller abuse, addiction and death are hot topics these days. Law enforcement, government and physicians have met to try to figure out how to stop the epidemic caused by the misuse of strong prescription painkillers that have become a lethal black-market commodity.

The talk is about painkiller abuse. Why isn't anyone talking about pain?

Addiction to prescription painkillers is nothing new. Canada's first national drug laws were a response to the non-medical use of opium, a highly valued and effective painkiller that could treat conditions from diarrhea to flu. It also happened to be addictive.

Many citizens, prescribed an opiate to relieve some form of pain, soon found themselves addicted. They continued to take it, usually in secret and often with little discernible effect on their lives, so long as it was easy to access. Once it became illegal, addicted citizens had to turn to a black market for ongoing relief because doctors were forbidden from providing what we would now call maintenance doses, to allow addicted citizens to continue living lives relatively free of the pain of withdrawal. It became an issue of law enforcement, not medicine, and the black market grew.

This is why the issue of pain is so important. Although some people seek fentanyl or OxyContin to get some form of high, the prevalence and potency of these drugs came out of medical necessity. Pain needed to be treated. But the first approach to pain treatment is to mask it – give a painkiller. That painkilling went from being a first response to a major strategy to deal with pain.

Why is this so? This is the crucial question that physicians and government officials need to answer (while letting police deal with illegality). The answer will lie beyond the biology of pain and in its sociology. What is going on that so many people are seeking pain relief? Is our medical system so clogged that patients with treatable conditions are given painkillers until they can be treated, by which time they have become addicted? Is it because the pain is the result of repetitive strain in a low-paid workplace, where sick days are few and it is easier to take a painkiller and get back to work rather than take time off for therapy and recovery? What is causing so much pain?

These questions must be answered not only because it would reduce the use of addictive drugs, but because it could improve pain management. Attending to the causes of pain would allow more treatment in a way that didn't demonize painkillers, but rather reduced stigma and fear.

Pain can be debilitating, and it can lead to illegality. Two years ago, an acquaintance, let's call her Lisa, suffered a concussion. Her physician refused to prescribe opioids, providing instead milder pain medicine that was essentially useless. Unable to afford not to work, she continued in a reduced state of functionality, with periods of blinding, nauseating pain affecting her job and her chance for advancement. Her neurologist asked the family doc to prescribe stronger meds to be used as needed. He explained that, with concussion, pain can actually be a cause of increased problems because the brain, preoccupied with the pain, cannot rest and heal. Lisa's family doctor refused to write the prescription, because she would not prescribe opioids. Two years later, the pain continues, sometimes with blinding migraines that render Lisa incapacitated for days.

What are Lisa's options? Seek a new physician? Going to a doctor and asking for painkillers would feed into the medical concerns about doctor-shopping addicts. Her family doctor refuses to support medical marijuana, given the stigma around such substances. Seek self-medication? Turning to the black market takes pain management outside of the medical view. It is illegal, and intensifies the problem.

Concern about addictive painkillers is strong, but concern about the broader social causes of pain should be even stronger. Failure to investigate and address the causes of pain, both social and biological, will lead to new pain drugs and another painkiller crisis. A new shop will open on the black market and more people will die. 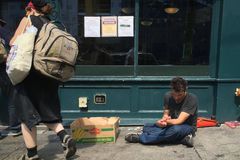 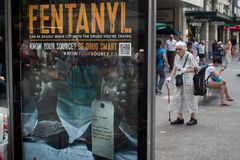 Opinion
Enlisting Beijing to help stop fentanyl exports won’t be easy
December 6, 2016
Follow us on Twitter @globedebate Opens in a new window
Report an error
Due to technical reasons, we have temporarily removed commenting from our articles. We hope to have this fixed soon. Thank you for your patience. If you are looking to give feedback on our new site, please send it along to feedback@globeandmail.com. If you want to write a letter to the editor, please forward to letters@globeandmail.com.
Comments