We have always read about kings and queens, from fairy tales to Shakespeare. They have been our role models from earliest childhood, from earliest civilization. Every culture in the world circulates folk tales about emperors, princesses, and chiefs. Sophocles wrote plays about kings, and that was the beginning of drama as we know it. The current age petulantly demands entertainments about commoners (evidence of political advancement), but this is a short blip in the history of art. It is an anomaly.

We should, it is said, now feel very guilty about entertainments depicting the very privileged. They are mere escapism and don't reflect the real problems of ordinary people. This is like saying we shouldn't enjoy movies with superheroes in them. They are not ordinary people either.

It's a bit funny that a sudden surge of fascination with monarchy, particularly the British monarchy, agents of slavery and colonialism for a couple of hundred years, is ascendant right now, at exactly a time when intellectual examination of the dangers of privilege is at a height I have never seen before in my lifetime. The word "privilege" has never been used as much in arguments over policy or ideas; it has now become synonymous with sin.

And yet the most expensive drama ever created by Netflix and Left Bank Pictures is The Crown, currently in its second season. The first season cost $172-million to make. Its actors have been nominated for numerous awards, and its leads have won Best Actor and Best Actress at the Screen Actors Guild Awards. It is shot in lush palaces and castles, and revels in ball gowns and uniforms and Rolls Royces. It is sympathetic to the problems of the cloistered and threatened monarchy. Its characters debate at length the value of privilege and tribalism. It circles doggedly around the question of the worth of the symbolic and the intangible. It is hugely popular.

The Crown is but a part of a recent and familiar surge of fascination with the British monarchy. A comprehensive museum exhibition on the life and possessions of Charles II has just opened in London and is wowing even progressive British media. Called Art and Power, the show is at the Queen's Gallery at Buckingham Palace, it centres on the first English king to take back the crown after Cromwell's revolution, a king who transformed court into a centre of artistic patronage. The show is filled with unimaginably gorgeous objects: a grand portrait of Charles in his coronation robes by John Michael Wright, tapestries, silverwork, vast allegorical tableaux. The curation stresses the value of royal patronage in the arts and suggests that the Restoration was a welcome and necessary return to culture and sophistication after the nasty Puritans' reign. This argument echoes ones made frequently by the characters of The Crown, who are always reminding themselves of the morale-boosting value of a remote and conventional monarchy.

Even the leftist Guardian published a dazzled and ecstatic review of this luxurious show. Some subtle mezzotints of the king, the review concludes, "… make a human being out of a monarch."

Which is really all the rage, isn't it? In the popular press, everyone is aswoon over the upcoming royal wedding, a felicitous mix of glamour and romance, and also a union said to be humanizing for the institution.

I know royal-watching has never been out of style, and that surges of passion like this one are not new, merely cyclical. The usual explanations for the adoration of all things crowny always apply: It is escapism, it is a fantasy of wealth and luxury and glamour and tradition and stability, which is comforting in an unpleasant reality. This is still true. But surely the contrast of this obsession and the age's terror of "privilege" is new? What an odd time to live in: one in which the old political left and its economic concerns have given way to a left fixated on racial and gender identity whose primary evaluation of any person or position is based on to what degree it exhibits privilege. It is a world in which privilege is at its most damned and then triumphantly celebrated.

It's as if in the midst of, say, a great feminist revolution our primary entertainment were to suddenly becomes scantily-clad women. It's as if the more we are reminded of the sinfulness of privilege the more we wallow in it. We are thrilling to the most taboo of pleasures right now, revelling in sin. 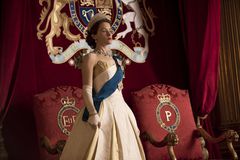