What do you do when a political candidate campaigns against not just opposing candidates, but against the safety, citizenship, equality, fundamental rights and even existence of entire categories of his fellow citizens?

Now that this is their reality, Americans need to learn, fast, the European practice known as the cordon sanitaire. It is applied when, in the face of an extremist electoral threat to the physical safety of minority groups, there is an agreement among the major political parties, morally serious candidates, voters and the media to come together to prevent the extremist politician's campaign from becoming a normal part of the political process.

In France, it has meant that supporters of the centre-left Socialist Party have sometimes agreed to vote en masse for candidates from the conservative party of Jacques Chirac and Nicolas Sarkozy to prevent the National Front of Marine Le Pen, a single-issue race-hatred party, from gaining seats.

In Germany, the Netherlands, Italy and Belgium, it means that all the mainstream parties have agreed to "non-co-operation" pacts to prevent parties of intolerance from becoming part of coalition governments.

And in most European countries, it means that the media have agreed not to treat these anti-minority parties and their candidates as if they were part of normal politics. They are reported on as pathological or criminal problems, not as plausible options to be considered by serious voters.

There is an understanding, in short, that it's worth sacrificing your short-term political ambitions, your sense of ideological solidarity and your traditional values of professional impartiality to prevent something atrocious from occurring, which would do permanent damage to your party, your country and the democratic system.

That is the situation Americans, their Republican Party and their media now face. Now that they are down to a two-way presidential race, they are discovering, far too slowly, the need for a cordon sanitaire around Donald Trump.

The threat posed by Mr. Trump is not conventionally political: It is not a matter of policies or proposed laws that can be discussed, debated and dismissed. Rather, it is a threat to the polity itself.

By running a white-supremacist campaign – and at this point there is no other word for it, as its key element is an attack on the legitimacy, citizenship and equality of Hispanic and Muslim Americans, and the enthusiastic tolerance of attacks by supporters against other minority groups, including Jews – Mr. Trump is seeking to disenfranchise and endanger large parts of the electorate.

Some Republicans have recognized the need to sacrifice their dreams this year to prevent the worst from occurring. On Tuesday, Republican Senator Mark Kirk of Illinois put it explicitly: "Donald Trump's latest statements, in context with past attacks on Hispanics, women and the disabled like me, make it certain that I cannot and will not support my party's nominee for president, regardless of the political impact on my candidacy or the Republican Party."

That cordon-sanitaire view has been supported by all three political members of the Bush family, by Mitt Romney and by Senator Lindsey Graham, who noted, optimistically, that "there'll come a time when the love of country will trump hatred of Hillary."

But a shocking number of prominent Republicans are trying to pretend that Mr. Trump is simply another GOP candidate, albeit one with some screwy views, but not an existential or basic moral threat – a move that has required some rhetorical and ideological acrobatics.

That was the case of Paul Ryan, the Speaker of the House of Representatives. After Mr. Trump devoted much of last week to denouncing the citizenship, employment and right to work of an Indiana-born judge who happens to be Hispanic, and by extension directly attacked the principle of judicial independence, Mr. Ryan acknowledged that this was "the textbook definition of a racist comment." But he stood by his support for Mr. Trump's candidacy.

The people who tell pollsters they'll consider voting for Donald Trump are not, for the most part, racists who believe in his wall-building vision of a white nation. They're just people who think this is normal politics, and that they have no good reason not to vote for the party they've usually preferred. It's time to stop pretending anything is normal. 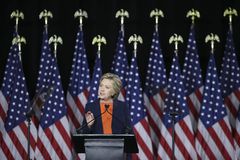