In order to explain what's happened to the NDP in Quebec in the 2015 election, it bears reflecting on the recent past. In 2006, when Stephen Harper came to power, the NDP had exactly zero seats in Quebec. In the 2008 election, it had only one. But by 2011 most Quebeckers, who had never liked the Harper Conservatives and were exasperated with the Bloc Québécois, placed their bets on a new party – new for them, at least – and supported the NDP en masse. It helped that they found its leader Jack Layton to be a sympathetic and inspiring figure, but the main attraction was that the NDP was unknown, untested, and unburdened by the baggage of the other parties, especially the Liberals.

Of course, what Quebeckers ended up with was a Quebec caucus made up of the newest of newbies, a 59-seat strong vanguard that was probably the least experienced group of rookie MPs since the Progressives swept into the House of Commons in 1921. The most experienced of the group – the senior NDP statesman from Quebec – was Tom Mulcair, who had, for most of his political life, served as a Liberal MNA and whose claim on Quebec was the fact that he had planted the NDP flag by winning the Outremont riding in a 2007 by-election.

Although Mr. Layton was the face that launched thousands of Quebec votes in 2011, Mr. Mulcair was in no small part the key to the NDP breakthrough in Quebec. On the strength of that Quebec wave, the NDP found itself suddenly catapulted from its forever spot as third party of the left, to a new position of power as Official Opposition. That strength and that power is what led to the choice of Mr. Mulcair not only as party leader, but as the rassembleur of Quebec support.

Mr. Mulcair proved to be as effective as an NDP parliamentarian in the House of Commons as he had been in the National Assembly. But his real task, the key reason for his leadership quest, was to transform that Quebec breakthrough into a pan-Canadian mission for power that would see the NDP replace the Liberal Party.

In comparative politics, Canada is usually known as a "two-plus" party system, with two major parties and a reference to the NDP (and, after 1993, a larger group of smaller parties). But the dominant force toward a bipartisan system in first-past-the-post electoral systems is exceptionally strong – we call it "Duverger's Law" after the French political scientist. In that clash, there may only be room for two major parties to alternate in power. Mr. Mulcair's goal was to make the NDP one of them.

Although the NDP survived in Quebec on Monday night – retaining 16 seats and 25 per cent of the popular vote, the Mulcair miracle did not happen. It may have been an impossible task, given the thin veneer of support in Quebec ridings combined with party resources spread thin across the country. And Mr. Mulcair will be praised for the way he illustrated the courage of his convictions on identity issues, for fighting the "good fight" in true NDP fashion. While it has reverted to its third-party status in a "two-plus" system, the NDP is not finished as a party – reaching a respectable seat count and vote share – and it still remains to be seen whether Mr. Mulcair's failure to make good on the Quebec promise means that he is finished as party leader. 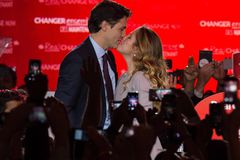 Opinion
Conservatives had the money, but forgot the message
October 20, 2015