When Graydon Nicholas, the Lieutenant-Governor of New Brunswick and the first Maliseet occupant of the vice-regal position, attended a special ceremony last October at St. Dunstan's Church in Fredericton to honour the canonization of Kateri Tekakwitha, you could read the pride and depth of feeling in his eyes. After all, the sainting of a 17th-century young woman who has been called the Flower of the Algonquins and the Lily of the Mohawks was a recognition by the Roman Catholic Church of the special abiding witness, suffering and dignity of the New World's aboriginal peoples.

In the same month, feminist scholars, cloistered nuns, historians and theologians celebrated the extremely rare honour of Doctor of the Church bestowed by fellow German Benedict XVI on the 12th-century Benedictine St. Hildegard of Bingen – cosmologist, mystic, composer, natural scientist, visionary and artist. And this a woman, the official Vatican publication L'Osservatore Romano acknowledged, who "urged the popes to reform, harshly criticizing them and explaining that the Holy Spirit spoke through her, a woman, because the Church, led by men, had betrayed in many ways her nature and her mission."

This year marks the 25th anniversary of the publication of John Paul II's apostolic letter Mulieris Dignitatem, a document that boldly proclaimed the institution's boundless thanks "for all the manifestations of the feminine genius which have appeared in the course of history." Despite the recent spate of feminine canonizations, it's easy to see that many Catholics – of both genders, lay and ordained – might reserve judgment on the efficacy of such a proclamation.

Think Nuns on the Bus! This quintessentially American phenomenon consisted of a travelling caravan designed to heighten awareness of Catholic social-justice teaching during an election year when familiarity with its contents was at a minimum – even among Catholic candidates. The initiative's primary driver, Sister Simone Campbell, even addressed the Democratic convention. Many U.S. Catholic bishops regretted the notoriety generated by Nuns on the Bus and saw it as a strategic move to sabotage their own efforts to underscore the serious encroachments on religious liberty by the Obama administration.

And this isn't the first instance of an increasingly public conflict between nuns and the episcopacy. Various sister-academicians and spiritual leaders – Elizabeth Johnson of Fordham University, Margaret Farley, professor emeritus at Yale, activist Joan Chittister – have been censured, forbidden Catholic honours and platforms, and isolated from their natural faith constituencies. Predictably, interest in their books has soared exponentially.

How to close the gap between the official proclamation of treasuring women in the church and the wide perception that they're undervalued, feared and silenced? Discrepancies abound. More women work in the Vatican than ever (and not in the menial role that was traditional practice for centuries); women are chancellors of dioceses; they hold positions of leadership in pontifical institutions and sit on papal commissions; they're widely consulted, read and admired. So what gives?

During the remaining years of the current pontificate, the most pressing challenge will be erecting channels of communication and trust between the hierarchy and women, those who are nuns and the vast majority who live their lives outside the cloisters or religious communities. For that to happen, there have to be structures that enable the honest dialogue, the careful listening, and the wise discerning that can only come when censure is lifted, sloganeering abandoned, and polarization muted.

Why not open the College of Cardinals to women? Include the likes of former Irish president Mary McAleese, Harvard jurist Mary Ann Glendon, Canadian pediatrician and bioethicist Sister Nuala Kenny, philanthropist Kerry Robinson, and feisty art critic Sister Wendy Beckett. They represent a broad spectrum of opinion, possess unimpeachable personal qualities and credentials, and are accustomed to speaking their mind.

Such an innovation is not a departure from doctrine, does not compromise the church's authority, and is not a frivolous concession to faddism. More important, it makes eminent good sense.

Opinion
Does Catholics Come Home campaign have a prayer?
January 3, 2013

U of T distances itself from Catholic group urging youth to resist homosexuality
January 2, 2013 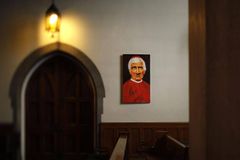