Bernard-Henri Lévy is one of the founders of the Nouveaux Philosophes (New Philosophers) movement.

Forget principles and morality. Forget, or try to forget, the quarter-million deaths for which Bashar al-Assad is responsible, directly or indirectly, since choosing to respond with violence to a peaceful uprising of the Syrian people. Set aside the fact his forces have caused 10 to 15 times more civilian deaths thus far than the Islamic State, whose horrific execution videos have overshadowed the Syrian dictator's invisible massacres.

But even if you can purge all of this from your thoughts, a policy for Syria that posits Mr. Assad as an "alternative" to the Islamic State is simply not viable.

He created the monster he is now pretending to fight. Is all that not a little much for a potential ally? Can working with the Syrian dictator possibly provide a sound basis for what is supposed to be a common effort?

The bottom line is Mr. Assad has no interest in winning. The man who now holds himself up as civilization's last bulwark against the Islamic State is also the last man who wants to see it eliminated.

After all, does a chess player, even a bad one, intentionally sacrifice his most powerful piece? Do any of us ever tear up our insurance policies? Do we really believe Mr. Assad and his cronies are too stupid to have realized that their political survival depends on that of the Islamic State and on maintaining themselves as the keepers of the gate through which the rest of us must pass to wage war against it?

"Of course not," the advocates of working with him concede. "But let's take a two-step approach. Let's defeat the Islamic State and then worry about Mr. Assad."

But this approach, too, assumes that dictators are more stupid than they really are. Worse, it ignores that politics follows its own logic, or at least its own dynamics. What the sorcerer's apprentices who want to work with the Assad regime ignore is that they would most likely have a great deal of trouble, when the time comes, distancing themselves from an ally who would not be shy about claiming his share of the victory. As a result, jihadism would rush back in, though perhaps in a different guise.

"Bashar al-Assad is the Syrian state," the same people say. "And we must not commit the fatal error of destroying the state." But this argument is not valid, either. The state has already failed: Mr. Assad controls only one-fifth of Syria's territory, and the remaining four-fifths will never willingly resubmit to its terrifying control. If his regime prevails, the state's citizens will continue to flee in droves to Turkey, Lebanon and Europe.

In fact, the Assad regime cares so little for its pseudo-state that it abandons its own soldiers caught beyond the territory it controls, as occurred in Tabqa, near Raqqa. Baathist Syria, whatever its friends in the Kremlin and elsewhere say, is dead and buried. And no military trompe l'oeil can revive it. But the supposed realists refuse to accept reality. Just as it was necessary to ally with Stalin to defeat Hitler, they claim, we should not be afraid to play the Assad card to rid ourselves of the Islamic State. Yes, jihadism is the fascism of our day, infected with plans, ideas and a will to purity comparable to those of the Nazis. I was one of the first to suggest the comparison some 20 years ago.

And yet it is absurd to compare the power of the two phenomena, or to suggest in the confrontation with the butchers of Mosul and Palmyra, the democracies face a strategic challenge analogous to that of the Nazi Wehrmacht. This historical leap is possible only for people whose political irresponsibility is matched by their proclivity for lazy analogy.

Make no mistake: The Islamic State is strong. But it is not so strong as to leave those who would fight it with only the politics of the lesser of two evils.

The West must decide what to do. In the aftermath of last week's peace talks in Vienna – which convened the United States, Russia, Iran, China, Egypt, Turkey, Saudi Arabia and other Gulf states, Jordan, Lebanon and key European Union members – that question becomes increasingly difficult. Should we equip what remains of the Free Syrian Army? Should we deal with the few remaining Alawite leaders whose hands are not stained with blood, or those members of the Assad clan who chose exile early and thus were not involved in the massacres?

Perhaps there is still time to bring together, on neutral ground, some of the elements that comprised the old Syria. Or perhaps more radical solutions – of the type implemented in Germany and Japan after the Second World War – are now required. All of these paths remain open, but they are narrowing. And none of them depends on the political survival of Bashar al-Assad.

A faint gleam of hope in the Syrian civil war
November 3, 2015 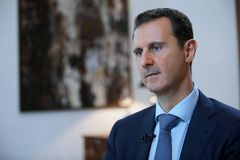