Excerpted from a speech former prime minister Paul Martin will deliver at the CIGI-TEPAV Think 20 ( T20) conference in Ottawa on May 4.

Just as the 2010 summit in South Korea was the first time the G20 leaders were hosted by an Asian country, and the 2012 Mexican Summit the first time they had been hosted by a Latin American nation, this year's summit in Turkey will be the first held by a country with a Muslim majority. Together, these meetings should serve as a reminder that the purpose of G20, with its many cultures, religions and political systems, is to make globalization work in a world of differences.

Now and over the years to come, the issues the G20 will have to confront will be as varied as there are pebbles on the beach. From increasing economic interdependence to the migration of people, from the spread of disease to threats to food security, for better or for worse, the most pressing realities the world faces are ones no borders can withstand.

Thus, while cross-country bargaining will inevitably begin on the basis of the self-interest of nations, in the end success will only be achieved if the member countries grasp the unassailable truth that the furtherance of a country's self-interest will depend more and more on the degree to which it furthers the global interest.

It is in this context that the importance of the great multilateral institutions must be underlined for it is they who have been delegated much of the responsibility for ensuring that globalization works. It is here as well that the G20's primary responsibility, which is to ensure the strength of those institutions, becomes self-evident. Indeed it is upon this that much of the G20's legitimacy rests.

The problem we face today is that the G20 is not living up to its responsibility.

For instance, one only has to look at the International Monetary Fund (IMF), which already weakened by its venture into the maelstrom of Greek finances at the behest of the euro zone, has been badly wounded by the failure of the United States congress to follow through on the commitment to the Institution's governance and quota reforms.

Nor is the G2O's responsibility to back the multilateral institutions limited to the financial arena.

The failure of the World Health Organization (WHO) during the Ebola crisis was tragic. How is it that Doctors Without Borders was so much more effective than the global health organization set up by the UN to deal with crises of this scope? While the WHO may bear some of the responsibility for its convoluted structure within Africa, the biggest obstacle it faces is the gross underfunding of the agency itself. This is the fault of UN members who have refused to provide the financial support required, not to mention the world's medical labs which have failed to do the research needed to develop the vaccines for tropical diseases over the last decade.

A similar comment could be levied in terms of the Office of the UN High Commissioner for Refugees (UNHCR). This should be of special relevance to Turkey which currently houses more than two million Syrian refugees. It is an issue that is certainly relevant to the European Union as countless numbers of Africans seeking refuge land on their shores or tragically are sent to a watery grave.

Among the questions to ask are, why is the UNHCR not being better supported?

And what happens to the generations born in refugee camps, who live in inadequate housing with insufficient health care and minimal opportunity for schooling? Where is the G20 on this, especially since the pain and despair of untold numbers of young people who are raised in refugee camps with an understandable grudge against an unfair world will be paid for by all of our children and our grandchildren.

Rarely has the opportunity for the G20 to act been as promising as it is now, given the U.S.-China agreement and this November's G20 summit occurring shortly before the United Nations climate change meeting that will take place in Paris in December. Surely the stars could not be better aligned for the G20 to provide the UN with the momentum required for ultimate success, especially since China will be hosting the next G20 summit less than a year later.

In summary, the issues raised here have one thing in common. In a world where there will no longer be only one economic superpower setting the direction, but three or four giant economies and a host of wealthy countries at the table, the debate will not simply be what should we do, it will be how will we get it done?

The answer to that question more often than not will be through the world's multilateral institutions, most of which are having difficulty today rising unsupported to the challenges they face.

The fact is, institutions count. Anyone who doubts this has only to ask whether the euro zone would be going through the troubles it is had it built the institutions required to make a monetary union work.

The G20 was brought into being so that international co-operation would reflect the needs of a changing world. That co-operation begins with the strengthening of the institutions created to make globalization work. This should be a G20 priority. 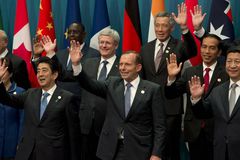