Angela Merkel is the chancellor of Germany, which this year holds the presidency of the Group of Seven.

The heads of state and government of the seven leading industrial countries will gather in Germany on June 7 and June 8 to discuss the most pressing global challenges. The Group of Seven countries are linked not only by prosperity and economic strength, but also by their shared values: freedom, democracy and human rights. Anyone doubting that there is a point to such summits need only look to the world's trouble spots to realize that there is a need, indeed a duty, to co-operate intensively to find joint solutions.

Who would have believed it possible, 25 years after the end of the Cold War, that the European peace order would be cast into doubt by the annexation of the Crimea? Or that the spread of the Ebola virus might destabilize several African states and set their development back? Or that in the Middle East, an Islamist terrorist organization would be trying to establish a so-called caliphate in the territory of two countries?

These examples – all of which are on the agenda for our summit – suffice to show that global challenges require international responses.

However, this G7 summit is about much more than crisis diplomacy. As has been the case ever since the format was established, it is of course also an opportunity to discuss the global economic situation. Our goals are sustainable, values-oriented growth and prosperity for as many people as possible. This can only be achieved in open economic systems with high investment and enhanced international trade based on high social and environmental standards. The G7 therefore supports the World Trade Organization in its efforts to conclude the Doha round of negotiations as quickly as possible. Equally, though, we need rapid progress in the negotiations on free-trade agreements between G7 partners.

The agenda set by the German G7 presidency focuses strongly on the two major tasks facing the international community in 2015. The first will be tackled in the autumn, when the United Nations sets new sustainable-development goals. Decisions taken then will determine the course of international development policy for years. I am convinced that the G7 should now commit to eliminating hunger and absolute poverty by 2030. Only if we manage to secure the food supply for the world's growing population will there be a chance of success for other development measures.

The second major global challenge is climate protection. For the first time in years, there is hope that the Paris conference in December will produce a climate agreement in which all countries, including emerging economies, undertake to reduce their emissions. This would take us closer to our goal of limiting the increase in global temperature to two degrees – which all the experts say is the only way to keep it within reasonable parameters.

The G7 ought to be a model for the necessary transition to a low-carbon economy. As industrial countries, we must abide by the pledge made in Copenhagen in 2009 to make available $100-billion a year from 2020 for adaptation and climate protection. Germany will double the funds its makes available for this goal between 2014 and 2020. I hope other countries will make similarly concrete pledges by the time Paris comes around.

The G7 has repeatedly assumed responsibility for the health of the world's people. That is why the meeting in Elmau will also discuss ways to combat neglected tropical diseases or the dangerous and growing problem of antibiotic resistance. The Ebola epidemic in several African countries has still not been entirely overcome. In Elmau, together with guests from affected countries and international organizations, we will be discussing how we can be better prepared for such epidemics, how we can prevent them, or at least respond better and faster if they do break out. The establishment of a worldwide task force with a sensible overall concept and adequate funding is undoubtedly a goal for the medium term, but we should be looking at it even now.

A further focus of the German G7 presidency is good work worldwide. We have not forgotten the tragic images from the collapse of the Rana Plaza textile factory in Bangladesh two years ago. I want the G7 to make it our aim to substantially cut the number of industrial accidents along the supply chain and to put in place measures to prevent such accidents and ensure better health and safety at work. These supply chains must become much more transparent. More and more people want information about the conditions under which clothes and foodstuffs are produced and make their purchase decisions accordingly.

In talking about work, we also need to talk about the possibilities open to women around the world to establish their independence and ensure their advancement through safe and skilled labour. Statistics show a reduction in poverty and inequality when more women play an active part in economic life. However, only about 50 per cent of all women are currently in gainful employment. Worse still, in many developing countries, the vast majority of those women who do work are employed under precarious or informal arrangements. The G7 therefore wants to give more girls and women in developing countries the chance of vocational training.

One thing is true of all the topics mentioned here: The G7 cannot meet these challenges alone; we will need many other partners. Nevertheless, I am convinced that the G7 can be, indeed must be, the driving force for a world worth living in, in the long term. I am committed to shaping the global economy and global integration in such a way that the living conditions of all people around the world are improved – politically, economically, socially and environmentally. We must be committed to peace, freedom and security. That is the value-added that can be expected from G7 summits. And that is the standard against which we should measure our actions. Harper to kick off Europe trip in Ukraine, before G7 summit in Germany
June 1, 2015 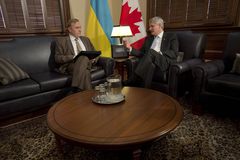