The brand-new subdivisions of Toronto roll on and on into the cornfields, a new one every month. I drive by them all the time. This is where young families live. But the streets and sidewalks are eerily quiet. You hardly ever see a child. No kids riding bikes. No kids playing shinny. No kids running wild in packs until their moms call them in for supper. It's as if the kids have vanished.

Where are they? Indoors, doing homework or playing Nintendo. In all-day kindergarten or regulated daycare. Instead of pickup street hockey, they're playing organized sports with regularly scheduled practices and games, supervised by grown-ups. They're at Kumon or dance or art, or swimming or tae kwon do. The children of the upper middle class are busy, busy, busy, with schedules that would rival that of any CEO.

It never stops. In high school, they start building their résumés for university. Community service? Check. Sports? Check. Squeeze in a part-time job. If they have some athletic talent, their parents will start investing serious time and money in it. By 18, they are seasoned veterans of the programmed life.

No wonder so many of them are helpless. All their lives, somebody else has told them what to do and where to be. Once they're on their own, they fall apart. Universities report record levels of stress among their students. Professors complain that for their male students in particular, 19 is the new 17. The kids have never learned to stand on their own two feet.

Could it be that we are doing them more harm than good?

David Whitebread thinks so. He's a psychologist at Cambridge University who specializes in the early years. He and 120 other experts have launched a campaign to get the British government to roll back early education, which begins at 5. Starting children too early on formal learning, he maintains, can cause "profound damage," including stress and mental-health problems. Until age 7, what children really need is … play.

"Play is a powerful way to impart social skills," writes Peter Gray, an evolutionary psychologist who believes children's lives have become ruinously regimented. Play also teaches children how to manage intense negative emotions, such as fear and anger, and to test themselves by taking manageable risks. Unstructured and unsupervised (oh, horrors!) play is crucial for their development.

"In play, children make their own decisions and solve their own problems," Prof. Gray writes. "In adult-directed settings, children are weak and vulnerable. In play, they are strong and powerful. The play world is the child's practice world for being an adult."

Those kids playing shinny until dusk weren't just wasting time. They were learning life lessons in problem-solving, negotiation and resilience. And they were better off without your help.

In hunter-gatherer societies, children play constantly until late adolescence. But today, as Prof. Whitebread observes, play has been almost squeezed out of their lives by a risk-averse society, by our separation from nature and by our widespread cultural assumption that "earlier is better."

But what's really killed off play is a vast anxiety that kids who don't receive the proper stimulation from a very early age – administered and overseen by professionals and parents – will lose out in the increasingly competitive game of life. That's what's behind the push to all-day kindergarten, a push that can have unfortunate results. Not all kids thrive. Some get anxious and stressed-out. It's just too much, too soon.

Middle-class parents are understandably anxious to give their kids the best chance possible in life. That's why they are willing to invest more in "kid credentialling" than ever. That's why the word "parent" has turned from a noun into a verb. It's not enough to just feed and clothe them any more. Now they must be guided through every step of life.

Today's parents are closer to their kids than they ever were, and that's mostly good. But closeness doesn't always foster independence. The cellphone is an extension of the umbilical cord. The other day, I read an interview with a high-powered female executive who is also the mother of a 15-year-old girl. In the middle of the interview, her cellphone rang. It was her daughter, who was calling to ask her mom whether she should eat a cookie.

I grew up in the 1950s, which was another world. I roamed in packs with other kids, doing forbidden things (climbing on construction sites was a favourite) where you could actually get hurt. Sometimes, we didn't see adults for hours on end. There were long stretches of boredom. I started babysitting my brother and sister when I was 10. When I went off to university, my folks and I hardly ever talked. There was one phone at the end of the hall for 38 students, and long distance was expensive. They had their lives and I had mine, and it was like that from very early on.

I'm not saying that was better. Kids today are exposed to enriching experiences my generation never dreamed of. They are stunningly accomplished. I'm glad I don't have to compete with them.

Yet when I'm invited to sit on scholarship committees to choose the best and brightest – as I occasionally am – I sometimes pause. The candidates arrive with résumés that astonish. They have A-plus averages and swimming championships and they volunteer at orphanages in Nepal. They are good and kind, and they have so much going on that it's a miracle they find time to sleep. But too many of them are a mile wide and an inch deep. They haven't thought deeply about life. They are incredibly hard-working but utterly conventional. They are very, very good at jumping through hoops.

It would be nice to leave our kids alone sometimes to sit under trees and dream. Who knows? They might not even miss us. 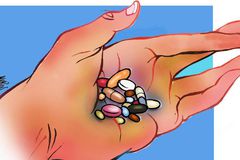