Charles Taylor is a professor emeritus of philosophy at McGill University and a recipient of the Kyoto Prize and the Templeton Prize. He served, with Gérard Bouchard, on Quebec's accommodation commission.

The project of bringing Canada to social democracy is a work in progress. Over the past half-century, it has been an arduous but not discouraging struggle. Sadly, we are not at the finish line; disappointingly, we are perhaps not so near that point as, this time last year, many of us had hoped we might be. But the New Democratic Party is an established player in the national political discourse to a degree that, a little more than half a decade ago, would have seemed impossible.

It is true that we have established the movement as a force at the provincial level, starting with Tommy Douglas and, spreading over the decades, across the country and back with Rachel Notley's election as Premier in Alberta last year. We are not there yet nationally, but it would be a great mistake to allow recent federal disappointment to destabilize us, or deflect us from our persistent, clear-voiced advocacy for social democratic principles.

In Quebec, the federal New Democratic Party's astounding success, after toiling on the edges of relevancy for most of our history, was the result of Jack Layton's long-term commitment to his home province. After being shut out in Quebec three times, Mr. Layton found and recruited Tom Mulcair, struck a chord with Quebeckers, and elevated the NDP to Official Opposition status. Let no one argue that this breakthrough is any sort of fluke. We now have a formidable caucus of 16 Quebec New Democratic MPs, with an effective voice in the House of Commons and in the party.

Having been elected against all odds in a by-election, then re-elected in a general election, Mr. Mulcair was not only a precursor, but a key engineer of the so-called Orange Wave. Afterward, his nurturing of those new MPs was a key factor in their effectiveness. His leadership has been vital in allowing the party to put down roots in the Quebec political landscape.

Last year, because of the effectiveness of the leader and the party in Official Opposition, expectations were high. We may have been guilty of excessive caution. We may have had some very bad luck in the timing of the niqab matter, which tested our moral mettle. But the result went against us. Given how high pre-election opinion polling had raised our hopes, the disappointment was profound. Tea leaves will be read, analysis done and reports tabled, but the two questions that persist are: "What path lies ahead for the NDP?" and "Should Tom Mulcair be at the helm?"

In Canada as a whole, the path forward hinges on the NDP's ability to refine the distinctions between real social democracy and the mixed compromise that our imitators offer. In Quebec, the NDP is relevant because of the intrinsic legitimacy that resides in the seasoned and trusted experience of Mr. Mulcair. The party has retained an impressive team of NDP MPs, and his qualities remain in the minds of Quebeckers. He is the most fluently bilingual of all parliamentarians, his political experience is grounded in his ministerial service to Quebec, and he carries with him the experience of a law career with social justice at its core. Through three decades in politics, and considering the powerful special interests he has faced, he maintains a set of unimpeachable principles – not a virtue common to politicians with as much experience.

The social democratic movement stands on solid ground, and the public's aversion to social inequality has the wind at its back. The NDP is crucial to this process and I, for one, do not wish to return to the days of being on the fringe of relevancy. We need to pause and rebuild. But we must be sure, in doing so, not to put our recent advancements at risk.

So here New Democrats are, with one of the best results in their history, yet struggling with the emotional consequences of a substantial loss. In the present constellation, and particularly at next month's NDP convention in Edmonton, the last thing we need is the distraction and dissent which are the unavoidable byproducts of a leadership campaign.

In Mr. Mulcair we have a leader whose tenacity and resolve enabled him to delegitimize Stephen Harper's regime. Mr. Mulcair brings not only his wealth of talent to the table, but also the passion and determination necessary to advance the movement of social democracy in Canada.

Mulcair would consider a deficit if it allows government to help Canadians
March 20, 2016 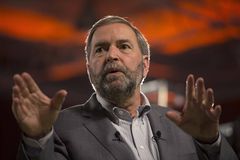 Opinion
The NDP’s big question: Should Mulcair stay, or should he go?
March 14, 2016

Tom Mulcair supporters speak out as knives sharpen for NDP leader
March 18, 2016
Follow us on Twitter @globedebate Opens in a new window
Report an error
Due to technical reasons, we have temporarily removed commenting from our articles. We hope to have this fixed soon. Thank you for your patience. If you are looking to give feedback on our new site, please send it along to feedback@globeandmail.com. If you want to write a letter to the editor, please forward to letters@globeandmail.com.
Comments