We're right back in the Cold War era, James Woolsey, a past director of the CIA, was saying. The North Korean threat is easily that dangerous.

California Congressman Darrell Issa took it further. North Korea's quantum leap in nuclear capabilities means the world is facing its most serious crisis "undoubtedly since the Cuban missile crisis." It's similar to the nuclear showdown between the United States and the Soviet Union over ballistic missiles on Cuba, he said. A nuclear arsenal "that can hit us and our allies, and it's a rogue nation that we suspect would use it."

Though many such comparisons are making the rounds, to invoke the Cuban missile crisis as a comparison to today's standoff with Pyongyang is to get carried away. North Korea's nuclear might is minuscule by comparison to a Soviet Union that had the power to incinerate the North American continent.

During that crisis, the tension was palpable. Dean Rusk, who was secretary of state in the Kennedy administration, told me the fear reached the point where he told his wife one night before slipping under the covers that they might not wake up in the morning.

In recent days, I've heard more chatter about sports on Washington streets and in restaurants than about North Korea. The big story here is college football – the shocking weekend upset by the University of Maryland over the Texas Longhorns.

But, as some you talk to here are well aware, there is one aspect of the conflict that makes things just as frightening as the 1960s game of chicken: Back then you didn't have leaders semi-unhinged and drunk with power.

Soviet leader Nikita Khrushchev was hot-tempered. At the United Nations he once took off his shoe and, in order to emphatically make a point, started banging it on the table. But he had worked his way to the top of the Soviet hierarchy through craftiness and cold calculation. By comparison to North Korean leader Kim Jong-un, he was stable. By comparison to Donald Trump, John F. Kennedy was a seasoned pro, smart and cool.

Back then, Mr. Kennedy's war-prone military advisers were the source of worry. They pushed for an invasion of Cuba. Today, it's roles reversed. The world looks to the military men around Mr. Trump to rein him in.

A prime source of anxiety now, as it was more than a half-century ago, is a miscalculation. Mr. Kennedy worried that the Soviets would respond to an American show of force in Cuba by attacking West Berlin, prompting an unstoppable chain of escalation.

Today, with the North Korean leader threatening Guam – the U.S. military hub in the Pacific – with a show of ballistic missiles, Washington could opt to deploy its missile defence system to target them. That could prompt a chain of escalation.

The Cuban crisis reverberated heavily in Canada as the government of John Diefenbaker took noisy exception to what it saw as Mr. Kennedy playing with fire. In today's crisis there are implications north of the border as well. If a North Korean nuclear-tipped ballistic missile is capable of hitting the west coast of the United States, it could errantly hit British Columbia, also. Canadian governments have resisted Washington pressures to sign on to the ballistic missile defence program. Those pressures will now measurably increase.

In a speech in June, Foreign Minister Chrystia Freeland said that given the tenor of the Trump government, Canada can no longer rely on Washington for global leadership.

In the Korean crisis it will have to do so. The stand-off with Pyongyang is Mr. Trump's biggest challenge to date. As well as great peril, it presents the President with a marvellous opportunity. This is a country whose unity has been fractured by the presidential election, by Charlottesville, by the President playing to populist prejudices and by much more.

Nothing can bring a country together as much as the overcoming of a dire threat to national security. Mr. Kennedy's success in the missile crisis was one example. There are no easy options for Mr. Trump to provide another. 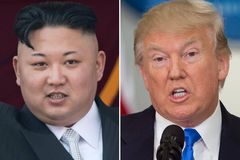 Globe editorial: With North Korea, talking is the only sane answer
August 30, 2017 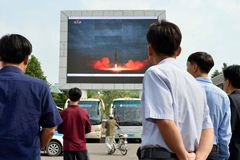