Before Donald Trump would be given the power to start a nuclear war, his predecessor, Barack Obama, warned him of what he considered to be the greatest threat facing the United States – the erratic, unstable leadership of North Korea's Kim Jong-un.

What Mr. Obama couldn't have imagined at the time, however, was that his successor would turn out to be every bit as unpredictable and volatile as Mr. Kim – every bit as capable of choosing war over detente.

Mr. Trump's inability to follow even the simplest of scripts was always going to be a problem that threatened to undermine the value of anything accomplished at the international summit on North Korea in Vancouver on Tuesday, hosted by Canada and the United States. You have to be able to count on your partners in order to have a plan. Yet, Rex Tillerson, the U.S. Secretary of State, doesn't know from one day to the next what fresh global tempest his boss is going to touch off.

But that was only one of the issues that was going to plague the Vancouver confab. Another was the list of invitees.

Inexplicably, the event didn't include global powers Russia or China, North Korea's most influential neighbours. Instead, countries such as Greece, Belgium, Colombia and Luxembourg were asked to attend – as if any of them have the clout to help resolve the Korean conflict. The absence of China was particularly perplexing.

This is a superpower the United States has been urging to apply more sanction pressure on North Korea in an effort to get Mr. Kim to abandon his nuclear ambitions. Instead, the summit hosts gave China more reason to maintain the status quo, even to harbour grievances and promulgate a storyline that the gathering was creating divisions in the international community more than it was building alliances.

Not surprisingly, Russia felt equally offended, with the country's foreign-affairs ministry denouncing the meeting as "destructive" and a "relapse of the Cold War mentality."

So much for establishing a common front against the North Korean menace.

In some ways, the summit was also undermined and overtaken by events.

Early in the New Year, Mr. Kim and South Korean President Moon Jae-in surprised the world by announcing the resumption of military-to-military talks. Mr. Kim also agreed to send a team to compete in next month's Winter Olympics in South Korea.

If nothing else, it temporarily eased some of the tensions that were building between North Korea and the United States, and their seemingly trigger-happy leaders.

No one knows. And that is the biggest dilemma in dealing with North Korea – the uncertainty of what Mr. Kim has in store next. Maybe he doesn't even know.

We are positive of one thing, however, and that's that he has zero intention of dropping his goal of becoming a major nuclear player. (If he hasn't achieved his objective already). That is not on the table in the talks with the South and never will be. And any sanctions imposed by a coalition of the willing – one that includes countries such as Greece, Belgium, Canada and Luxembourg anyway – is certainly not going to dissuade the man from threatening to blow things up real good.

China is the one country that has the muscle to make North Korea feel real pain when it comes to sanctions. It has so far been reluctant to ratchet up the economic heat on Mr. Kim, and the Vancouver summit only helped ensure it continues along this path.

The fact is, the world is a much more dangerous place than it was a year ago. Much of that is on Mr. Kim and his provocative actions, and some of it is on Mr. Trump and his own provocative statements. There is a testosterone-fuelled game of chicken going on with potentially catastrophic consequences.

The planet's best shot for survival is that we all live until Mr. Trump is out of the White House and a saner person takes over. And that Mr. Kim steps off a curb at the wrong time, too. Meantime, we can hope the United States makes inroads in developing a cyberwarfare strategy or ballistic-missile-defence system that neutralizes the danger North Korea poses.

If not, the next missile warning the people in Hawaii get may not be a false alarm.

Globe editorial: It’s time for the Liberals to get serious about missile defence
January 16, 2018 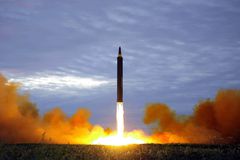 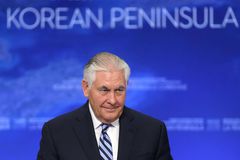 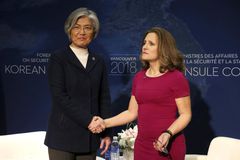