The emergence of Scandi-noir as the most generative and exciting subgenre of detective fiction can't hold a holy candelabrum to Vati-noir.

The intrigues that swirl around Vatican corridors – and I don't mean the swish of monsignorial cassocks – never abates. For centuries, the Vatican, its bureaucracy, its international networking apparatus (still second to none), and its CEO are the stuff that feed a media hungry for the exotic, the mysterious, the enduring.

The mystique of the Vatican and its modus operandi can produce fiction and commentary of dubious verisimilitude. The novels of Dan Brown, ahistorical and inelegantly written works of unchecked whimsy, have a large audience; the fantastical concoctions of both credentialed Vaticanisti, and media interlopers keen on a salubrious sound bite, shape the public perception of papal and curial misdeeds with little attention to accuracy.

The Vatican itself has contributed to this mélange of truth and invention by its less-than-stellar communications philosophy: protect the image at all costs, be economical with the truth, control the revelations. Think of the Vatileaks scandal, the conspiracy theories around financial and sexual cabals, the plots and counterplots of disgruntled curialists.

And then think of Pope Francis. With startling nerve he has humanized the papacy in a way only adumbrated by John XXIII and John Paul I; he has stripped it of its baroque obsessions and replaced them with his own passion for simplicity; he has modelled a ministry of leadership and unity that demystifies the office. He has, in fact, subverted the centuries-old notion of a monarchical papacy and that is the primary reason why he has created more opposition than any of his 20th-century predecessors.

In a Europe racked by the pull of a dangerous populism, increasingly insular in its vision, hobbled by fear of the immigrant and refugee, and prey to the false consolations of tribalism, Francis has defended the rights of the abandoned, called for acceptance of the strangers amidst us, and denounced xenophobic politics. And he has done this not only in word, but most dramatically by deed.

An unsettling model for other prelates, clearly, and a sign of his overriding conviction that mercy is the hallmark of genuine Christian living.

Francis's popularity polling remains high; he has by dint of deft appointments – Pietro Parolin as Cardinal Secretary of State and the like-minded Oscar Rodriguez Maradiaga as the point person for his Council of Cardinals – ensured that his global voice, among other nation states as well as within the mosaic of Catholicism itself, remains firmly rooted in his gospel vision of service and justice. Illustrative of this dual strategy and its success – though controverted and fierce – are the two pillars of his pastoral thought and its universalist outreach: Laudato Sí (on the environment) and Amoris Laetitia (on love and its social, familial and ecclesial constitution).

But for all his innovations – living outside the Apostolic Palace, bypassing his retinue to make impulsive personal phone calls, delighting in the spontaneous gesture over the manufactured correctness typical of papal rectitude – Francis remains the head of an institution more encased in tradition and protocol than the House of Windsor. He can't dismantle that; it is bigger than him.

But what he has shown again and again is that the office will not crush his ministry. He will have no truck with the lingering allure of caesaropapism, the seductions of supreme power. He will be simply Peter.

There are critics of Pope Francis who see him doing to the papacy what Jerry Springer did to family therapy, Judge Judy to the law, and Donald Trump to the American presidency: Playing to the public with a no-holds-barred attitude. But what Francis is really doing is moving the papacy outside the rarified atmosphere of a monarchy.

The papacy continues to fuel the imaginations of playwrights, novelists, and filmmakers. Roger Crane's The Last Confession, centred on the untimely death of John Paul I, was a popular play that starred in its Canadian iteration David (Hercule Poirot) Suchet as the anguished Cardinal Giovanni Benelli; Robert Harris's recent thriller, Conclave, a roman á clef that denies being such but provides uncommon insight into the politics of a papal election that has the ring of authenticity about it; and the forthcoming HBO series, The Young Pope, an Italian drama by Paolo Sorrentino that has Jude Law playing the fictious Pope Pius XIII, a cigarette-smoking conservative pontiff, the first pope of North America – winsome, wild, a holy boggle.

Vati-noir is inexhaustible in its appeal.

Pope in Christmas speech blasts Vatican resistance to reform
May 17, 2018 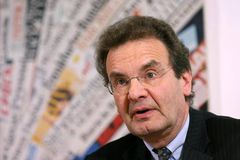