Justin Trudeau has to do something about his sense of humour. Though he made clear he was just kibbitzing, the spat over his hockey joke about Vladimir Putin and the Ukraine created a commotion he didn't need. It took away from his showing at the Liberal Party convention which was given high grades from media pundits and other observers. Where he scored was not on policy but rather on style and tone.

In contrast to the adolescent partisanship of his governing rivals, Mr. Trudeau came across as seasoned and good-natured. He toyed with his opponents, joking about how he drives them "nutty." At another point he reached out to Conservative voters, suggesting that they are good people who, in contrast to their leader, don't like seeing politics reduced to smears and non-stop attack ads.

His biggest applause line was not about policy, but character. "Negativity," Mr. Trudeau asserted, "cannot be this this country's lifeblood."

On issues, we got a little better idea of where the Liberal Party stands, but big gaps remain to be filled. The largest is on the economy. Mr. Trudeau's battle cry is about rebuilding the middle class. How would he do it? Don't bother checking his speech – it was stuffed with one vague platitude after another.

Getting specific on policy may be the last thing Mr. Trudeau has to worry about. Does a Trudeau really need to be defined? People already sense what Trudeau Liberalism is all about. They either like it or they don't.

That's the problem faced by the trailing Conservatives. People's minds are largely made up about the Liberal Leader. What he does on policy won't much alter their perceptions.

Canadian history shows that election results are triggered by dissatisfaction with the incumbents far more than the platform proposals of their opponents. In the early 1960s, John Diefenbaker's government self-destructed; Lester Pearson was there to pick up the pieces. In 1979, Joe Clark defeated Pierre Trudeau, more on account of Mr. Trudeau's deficiencies than any policy Mr. Clark put forward. The 1984 election turned on one blunder after another by Liberal incumbent John Turner. Brian Mulroney's platform, in which he vowed never to bring in free trade, was hardly long on specifics.

By 1993, the country was fed up with the Tories, who, after Mr. Mulroney handed off the ball to Kim Campbell, collapsed in even worse fashion than Mr. Diefenbaker. Jean Chrétien had his red book of policies, but would have won handily without it. By 2006, Canadians had had enough of the Liberals and their ethically challenged ways after a 13-year run. It was this fact, more than any Conservative policy proposals, that propelled Mr. Harper to victory.

In our politics, there's that oft-repeated line about governments defeating themselves. It is oft-repeated because it bears some truth. The other cliché is "Time for a change." After a decade or so, public fatigue sets in against most any leader, particularly given the overexposure generated by modern media. The cyclical workings of our system are all the more pronounced if the other party puts up a candidate with unusual personal appeal.

It's for all these reasons that Mr. Harper, in trying to defy the odds and extend his tenure beyond a decade, is fighting a steep uphill battle. Mr. Trudeau's success to date does not derive from his ideas. Mr. Harper's losing ground does not derive from any big change of policy direction. It's fatigue, it's people getting tired of his approach, it's voters wanting a fresh face with a different manner.

We can hope that Mr. Trudeau will flesh out his plans for the economy. He is capable of new thinking, as he showed with his Senate initiative. But electorally, it's the big tides that matter. They provide the momentum. And along with Mr. Trudeau's sunny ways, they are taking voters from the governing party.

Eds Note: This column was updated to include a reference to Justin Trudeau's hockey joke. 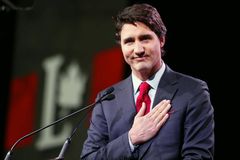 Opinion
It’s too late for Harper to change course
January 8, 2014