Most people don't need a nutritionist to figure out that a Triple Whopper with fries (more than 1,300 calories) is more fattening than a plate of lettuce with lemon juice on the side. But if you are confused on this point, help is at hand. In a bold move to tackle the obesity crisis, Ontario's nanny (oops, Liberal government) has proposed a law that would make chain restaurants include calorie counts on their menus. Take that, fatties! You can no longer claim you didn't know.

This bold initiative comes hard on the heels of school cafeteria reform, which had the effect of starving school cafeterias of revenue as students fled to nearby fast-food joints. You can lead a kid to salad, but you can't take away his chicken nuggets.

Restaurant calorie counts are based on the premise that if only people knew what's good for them, they'd do it. That is why all those government campaigns to get us to exercise have been so successful. Remember 5BX? I do! I did the jumping-jacks for at least a week.

Philadelphia, which imposed a calorie-label law in 2010, provides a good case study of the law's impact. Researchers studied 2,000 McDonald's and Burger King customers after it went into effect. The law made virtually no difference in the calorie count of food that people purchased or the number of times they ate at the restaurants. About 60 per cent of them didn't even notice.

In another study, researchers at Carnegie Mellon wondered whether more information might help. So they gave McDonald's customers pamphlets with recommended calorie intakes for a single meal and for a day. Nothing changed. Despite their new-found knowledge, a third of the customers continued to eat 1,000-plus-calorie meals. The researchers also found that people of healthy weights made the same choices as obese people.

"It is hard to counteract the fact that fast food is cheap and tastes pretty good," Dr. Brian Elbel, lead researcher for the Philadelphia study, was quoted as saying. "We need to consider other, more robust interventional policies in places where obesity is most prevalent."

That sounds ominous. One wonders what such policies might consist of. Fat taxes on the overweight? Banning fast-food joints in certain (read: low-income) neighbourhoods? Force-feeding arugula to porky kids? Also, there's the awkward fact that obesity is very much a class problem. Despite its 400-calorie Mocha Frappuccino, you don't find very many obese people at Starbucks.

Yet even though they are completely ineffectual, restaurant calorie laws (along with soda bans and school menu reform) are beloved of regulators and politicians, because they look as if they are taking action on what everyone insists is today's most urgent health crisis. Better still, it doesn't cost them anything. Fast-food restaurants don't mind either, because they can claim to be socially responsible even as they research ever-better ways to hit our sweet-fat-salty pleasure spots.

Then there's the rest of our lives – the explosion of screen time, the demise of outdoor work and play, the rise of two-income families with no time to cook. To say nothing of impulse control, at which human beings are not very good. All we have to do to fix obesity is fix human nature first.

Opinion
Why are we still debating kidvertising? Ban it. Now
December 5, 2013 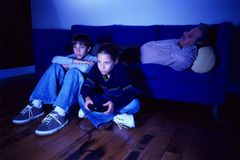 Opinion
The nudgeniks can’t save us from ourselves
August 24, 2013

Opinion
The battle against obesity begins at school
October 29, 2012