If you needed any evidence of just how much of a concern the prospective candidacy of businessman and reality television star Kevin O'Leary is to those seeking the leadership of the federal Conservative Party, you got it this week.

Lisa Raitt, the former Conservative cabinet minister and current Opposition MP, held a news conference to announce she was launching a website: StopKevinOLeary.com. The former labour minister denounced Mr. O'Leary's views on everything from unions to the military as dangerous and out of touch.

I'm sure he hasn't stopped smiling.

It was the surest sign yet that although the former Dragons' Den star has yet to formalize his leadership overtures by jumping into the race, he is a threat, if not the front-runner.

Related (for subscribers): Kevin O'Leary is not Donald Trump – but their paths to politics could be similar

Clearly, Ms. Raitt hopes to capitalize on this move by mining the names and e-mail addresses of those who sign up on the Stop Kevin O'Leary website for future supporters and donors. Just as evident is the fact Ms. Raitt's campaign desperately needs to do something to gain some traction in this race.

Most of the airtime has so far been swallowed up by Mr. O'Leary and Kellie Leitch, whose controversial, anti-immigration campaign was also the target of Ms. Raitt.

The Stop Kevin O'Leary ploy was Ms. Raitt's attempt to carve out a piece of this leadership race for herself.

The Opposition finance critic does not do schlock and gimmick well. She is a straight-up, old-school politician.

However, right now she is not registering on many people's radars as the race enters a critical phase. She needs to do something to get people excited about her candidacy or resign herself to the fact that now is not her time and bow out gracefully.

She was not the only leadership candidate to take aim at Mr. O'Leary this week.

Andrew Scheer also did, urging the TV entertainer to officially declare ahead of the upcoming French leadership debate. There is fat chance of that happening.

Mr. O'Leary does not speak French. And the last thing he is going to do is sweat through a debate where he needs an interpreter to tell him what the question is, let alone offer an answer in French. Clips of those cringe-worthy exchanges would live on in infamy and, as someone who has come to know the power of television intimately, Mr. O'Leary is not going to hand future opponents that kind of gift.

However, he will not be able to escape that reality forever, which ultimately could be his fatal weakness.

It is quite possible that Mr. O'Leary could win the Conservative Party leadership race, even though people scoffed at that notion last year when it was first floated. Back then, Donald Trump was also being discounted as a real threat to the presidency. People have since learned not to be so cocksure of themselves.

Still, it seems unimaginable that Mr. O'Leary could win a federal election without being able to converse in both of the country's official languages.

He could pledge to devote himself to a nightly regimen of Rosetta Stone, and yet it's highly dubious he could emerge in 2019 ready to take on Justin Trudeau in a French leaders' debate.

That said, he could front a populist conservative message that would resonate with many Quebeckers, some of whom might be prepared to overlook his struggling language issues. Who knows?

But we are getting ahead of ourselves.

Mr. O'Leary still has to declare his entry into the race, let alone win it. But there is something about his potential candidacy that feels a bit like what we are witnessing in Alberta with the Progressive Conservatives, who are also looking for a new leader.

There, former federal cabinet minister Jason Kenney has been playing the role of scary outsider who would destroy the party. (Just as many fear Mr. O'Leary would do to the Conservatives). And like Mr. O'Leary, Mr. Kenney was discounted early on by some who said he didn't have the necessary connections with the party establishment to win a leadership.

There were also news conferences held by leadership candidates warning about what Mr. Kenney would do not only to the Progressive Conservatives, but the province as a whole.

Yet today, by many people's estimates, he is the best bet to emerge as the new PC leader.

You can be sure Kevin O'Leary has taken note. 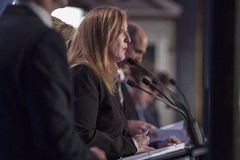