Reading through the #M103 hashtag, as I do when I can't actually just put staples in my hand, you'd think the Canadian government was debating passing our nation's first magic motion.

There's so much storytelling going on over there with the #M103 theorists, there's a good chance Joseph Boyden is going to start hanging around their barbeques.

Motion 103 calls for the condemnation of "Islamophobia and all forms of systemic racism and religious discrimination." It instructs a committee of Parliament to look into the issue. But the tales some tell of the motion – which legend, and only legend, has it is a bill – are so fanciful, far-fetched and dystopian that #M103 may be the first hashtag nominated for a Hugo Award.

There are two major story lines in play around #M103. Some objectors seem to believe that the passing of the "bill" will cause our Constitution to go up in flames (flames that will no doubt be used to cook halal barbeque), after which we will all be forced to live under sharia law and be forbidden to criticize anything to do with Islam or a Muslim again.

More moderate #M103 theorists (this is like saying "more moderate cannibals") claim that the motion is a slippery slope, because once the committee is done with all that talking and compiling, they'll publish a report; and that report will inevitably inspire a bill, probably a sharia bill! That bill will cause our Constitution to go up in flames, after which we will all be forced to live under sharia law and we will not be allowed to criticize anything to do with Islam or a Muslim again.

To be fair, the Twitter feeds of these respective remedial schools of thought suggest that, were this ever to happen – and silencing criticism of Islam is entirely not what M-103 can, will or aims to do – a lot of #M103 theorists would be left with a great deal of time on their hands.

Let us hope none of these people uses this time to watch Raiders of the Lost Ark again, because that film appears to have already done enough damage to their understanding of codified law.

The reality is that a written law, in paper or stone-tablet form, can't melt a man's face off. No text is that puissant.

Even if, through some bizarre plot twist, a bill like the one that these people seem to imagine M-103 to be did pass, it would not survive a constitutional challenge.

Why do these people believe this mere motion has such power, you might well ask – even those of you who were never troubled by the fact that people are being used as a power source in The Matrix, surely the least efficient method of power generation in all of fictional future history?

They are mostly convinced that M-103's power comes from the fact it contains the word "Islamophobia." And that word is apparently too potent to be contained within the pages of a private member's motion.

"That word just has to go!" the people cry. "Do not table that which you cannot put down!"

Judging from the panic over the motion's use of the word Islamophobia, you'd think it was the linguist threesome-conceived-baby of abracadabra, Bibbidi-Bobbidi-Boo and Beetlejuice.

"Islamophobia!" the #M103 theorists call out in confusion. "What could that possibly mean?"

Well, guys, I'm going with an "an extreme or irrational fear of or aversion to Muslims." It's not brain surgery.

Oh. I'm sorry. Let me help you: That is surgery performed on a brain.

Liberal MP Iqra Khalid, who introduced the private member's motion, when asked in the house to define the word, said "Islamophobia is the irrational hatred of Muslims that leads to discrimination."

Fair enough, and now's as good a time as any to point out that they didn't take the word "antisemitism" out of the name of the Parliamentary Coalition to Combat Antisemitism and yet I'm still allowed to say I don't find Seinfeld all that funny.

I don't want to be left out of this frantic, cacophonous elevator pitch of protest that is gripping Canada right now. If there's Telefilm money to be had, I want in, so I'm going to go with "That's the spooky thing! That's the hook! It will look exactly like the world we live in now! Nothing will change! 'Coming to a theatre near you, this summer's hottest political non-thriller: The Hunt for Something To Be Upset Over.'"

This film will be a timely metaphor for the situation facing my country.

Maybe you're not feeling the crisis right now, or when you meet Kadeem and Stacey for brunch on Sundays or when you watch Saadia teach your kids to swim at the YMCA. But let me try to make the situation clear for you.

Picture a frog in a pot of water on an unlit stove. Very slowly, a person leaves that stove entirely alone, perhaps makes a sandwich. Also, this person muses to himself that "It's desperately tragic that two IT guys, a chemical-engineering professor, a man who studied geology at Laval University and then opened a grocery store, a fellow who worked for Quebec's health-insurance board and an analyst-programmer were all shot while they prayed, seemingly only because of where they prayed." Then this person says aloud, "I condemn this, and will maybe poke about and see if there's an underlying systemic problem we should address."

Maybe the frog jumps out of the pot; maybe the frog stays put. Either way, the frog's absolutely fine, if a little damp. Which frogs don't mind.

Be warned! We are that frog, Canada! That frog is what we as a country will become under the sinister influence of M-103 – one large, metaphorical, damp, room-temperature amphibian.

The #M103 theorists are on fire these days. It's pure H.P. Hatecraft over there. It's Muslims, Muslims, Muslims all day long over there. There are multiple tweets calling Muslim members of Parliament "terrorists" and the "Muslim Brotherhood of Canada" and worse.

Currently, Muslims make up less than 4 per cent of our population, but I'd say about 40 per cent of the subject matter of our tweets. I'm reminded of when my boy came home from camp and said, "It was a little intense in the cabin at night. I finally had to say, 'You know, guys, you talk about girls all the time, you should try talking to some.'"

indie-bigotry playing in a fart-house Twitter stream near you before hitting the Comments section. In the ideal world that Canada certainly has the potential to become, we'd be able to scroll right through it, leave it in the Groundless-Xenophobia-Fuelled-Panic section. But this genre has found its way to the big screen. M-103: The Motioning is playing out on almost every screen of the Conservative Party Leadership Race megaplex. Of course, Kellie Leitch has it in IMAX 3-D! The only Conservative candidate who has said he'll vote for the motion, which is not actually a spell – Google it – is Michael Chong. It's like Mr. Chong is over in Theatre 13 showing some classic conservatism, poor guy. It's all fiscal restraint and small government over there, and what with the crowds demanding spectacle, mysterious second-shooter conspiracy and alien invasions, he might as well be in black-and-white, silent and have Swedish intertitles.

It's always disappointing when Canada does second-rate rip-offs of American films. We're best when we stick to original content and tell a different story. 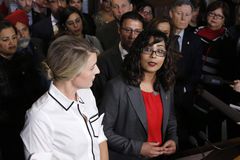 In populist winds, the Conservatives’ inclusive tent is collapsing
February 17, 2017
Follow Tabatha Southey on Twitter @TabathaSouthey
Report an error
Due to technical reasons, we have temporarily removed commenting from our articles. We hope to have this fixed soon. Thank you for your patience. If you are looking to give feedback on our new site, please send it along to feedback@globeandmail.com. If you want to write a letter to the editor, please forward to letters@globeandmail.com.
Comments