The NDP almost wiped out the Bloc Québécois in 2011. The hardline separatists might be about to kill what's left of the party. Under the leadership of Mario Beaulieu, who was elected to helm the Bloc last weekend, the party will be marginalized, even scorned, by many mainstream sovereigntists, beginning with former Bloc leader Gilles Duceppe.

Mr. Beaulieu, in his mid-50s, is a professional activist who's been a permanent and visible fixture of the ultranationalist scene for more than two decades. As president of a Parti Québécois riding association, he made life miserable for several PQ premiers by pushing for radical policies at party conventions. After having been defeated as a Bloc candidate in the 1997 federal election, he managed to be appointed as spokesperson for various groups promoting a hardening of the province's language laws. In 2009, he became president of the Société Saint-Jean-Baptiste, an old nationalist institution that is now a hotbed of radicalism, especially on language issues.

Mr. Beaulieu has no charisma, he is not a good public speaker and he has never said or written anything memorable, apart from his anti-English diatribes and his knee-jerk, independentist rhetoric. His latest exploit is a video in which he acts as a tour guide showing how Montreal has been totally submerged by English – a ridiculous, paranoid delusion.

Mr. Beaulieu has his strong points, though: his relentless devotion to the "cause" and his organizational skills. And so, there he was again when the leadership of the Bloc became vacant. Mr. Beaulieu had the support of a dozen high-profile sovereigntists, such as former premier Bernard Landry and language activist Pierre Curzi, who hope against all odds that a new, more aggressive style of leadership can revive their lifelong dream. Mr. Beaulieu won handily over the other contender, André Bellavance, one of the four remaining Bloc MPs.

Life won't be easy in the Bloc, with Mr. Beaulieu being the non-elected leader of a caucus whose four members voted against him. Several Bloc officials resigned this week; more are expected to follow suit.

Mr. Beaulieu vowed to change the culture of the Bloc, which he accuses of having been too lame in fighting for independence and too accommodating with English Canada. From now on, he declared, Bloc MPs will spend most of their time outside Parliament, touring Quebec to sell independence. And they will contribute $50,000 from their federal salaries to sovereigntist groups – a rule that will do nothing to attract candidates, since one reason why the Bloc was an interesting career choice was the attractive salaries and pension plans of federal MPs.

The Bloc in its heyday could count on the votes of the "soft nationalists" because under its founder, Lucien Bouchard, and Mr. Duceppe, who succeeded Mr. Bouchard in 1997, the party dutifully collaborated with other federal parties on certain issues and presented itself as the "defender of Quebec's interests." It left to the PQ the job of campaigning for sovereignty – a logical strategy since it's only in Quebec that sovereignty can be achieved.

Mr. Duceppe is horrified with the evolution of his former party. He was especially incensed when he heard some of Mr. Beaulieu's partisans chant "Nous vaincrons!" (We shall overcome!), a slogan associated with the Front de libération du Québec, a terrorist group active in the 1960s.

Good news for Thomas Mulcair and Justin Trudeau: The road is wide open for them. The Bloc will only get, at best, the support of the dwindling group of diehard sovereigntists.

Opinion
Can Mulroney save Quebecor from Péladeau’s heavy fist?
May 29, 2014 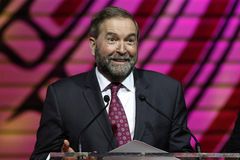