Michael Byers holds the Canada Research Chair in Global Politics and International Law at the University of British Columbia. He is the author, most recently, of the research report "One Dead Pilot," available at policyalternatives.ca

Thirty-nine Canadian pilots lost their lives flying the CF-104 Starfighter, in planes that never saw combat. A staggering 110 of the 239 Starfighters purchased by Canada in the 1960s crashed before they were replaced by CF-18s.

These numbers remain relevant today given the similarities between the Starfighter and the F-35 that the Harper government is now poised to buy.

The Starfighter was built by Lockheed Corporation. The F-35 is built by the same company, which since 1995 has been named Lockheed Martin.

Designed as an interceptor, the Starfighter was soon re-tasked with ground attack. The F-35 is intended for ground attack, hence its name: 'Strike Fighter'.

The Starfighter had small, thin wings that resulted in high "wing loading", which reduced manoeuvrability and made the aircraft susceptible to stalling. The Starfighter was so unforgiving of piloting errors that airmen called it the "Widow Maker."

The F-35 also has high wing loading and poor manoeuvrability. In 2008, the RAND Corporation said: "It can't turn, can't climb, can't run." According to the Pentagon's director of operational test and evaluation, the U.S. government was forced to downgrade the requirements for the F-35's turn performance "from 5.3 to 4.6 sustained g's."

The F-35 also has just one engine. Although engines are more reliable today than during the 1960s, failures still occur. And like the Starfighter, the F-35 will be used for ground attack and flown fast and low.

The Starfighter's limited manoeuvrability made it unsuitable for dogfighting. Canada never even bothered to equip the planes with air-to-air missiles.

Poor manoeuvrability also made the Starfighter susceptible to anti-aircraft artillery and surface-to-air missiles. The U.S. Air Force sent Starfighters to the Vietnam War, and promptly lost fourteen of them – without making a single air-to-air kill.

The F-35's limited manoeuvrability is compounded by a low carrying capacity for missiles, which puts it at risk of being overwhelmed by larger numbers of enemy fighters. The United States plans to use its larger, faster, more manoeuvrable F-22s to protect the F-35. As General Michael Hostage told the Air Force Times: "The F-35 is not built as an air superiority platform. It needs the F-22."

The initial role of the Starfighters as interceptors was eliminated by the development of a new technology: the intercontinental ballistic missile. New technology could just as easily overcome the F-35's much-vaunted protection against surface-to-air defences. China and Russia are reportedly developing radar that can detect stealth aircraft.

When the Starfighter was re-tasked for ground attack, a new navigation system and other avionics were added. The additional equipment increased the weight, making the aircraft even less forgiving of piloting mistakes. It may also have increased the frequency of such mistakes by heightening the risk of sensory overload.

The F-35 is supposed to provide pilots with greater situational awareness through advanced sensors and by fusing data from other aircraft and ground stations. A combination of computer power – involving 24 million lines of software code – and a head-up display helmet are supposed to prevent sensory overload. However, neither technology is proven or mature.

In the 1970s, a U.S. Congressional investigation found that Lockheed had paid large bribes to promote foreign sales of the Starfighter. The discovery led to the adoption of the Foreign Corrupt Practices Act.

Lockheed Martin is no longer allowed to pay bribes. In 1995, it was fined $24.8-million for giving an Egyptian official $1-million to secure contracts for C-130 transport planes.

Lockheed Martin is allowed to seed the defence industries of allied countries with small contracts, which are linked to promises of larger contracts if the company's equipment is chosen. This strategy has resulted in widespread industry support of the F-35, even though, under Canadian procurement rules, the manufacturers of competitor aircraft would be obligated to spend just as much money in Canada if their model were selected.

Still, there is at least one important difference between the Starfighter and the F-35. The Starfighter could fly at Mach 2.2. A half-century later, the F-35 tops out at Mach 1.6.

The government of Stephen Harper is blind to all this, of course. And by ignoring the past, they condemn our pilots to repeat it. 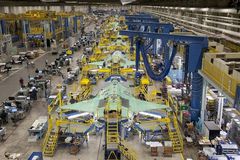