History is sometimes made in unlikely places. This week, it was Wisconsin's turn. Wisconsin, best known as the land of dairy cows and cheeseheads, is a test case in the crisis of the entitlement state. The test was whether a political leader can take on the government unions and survive. He did.

Wisconsin's vote to recall Governor Scott Walker has been called the second most important election in the U.S. this year. But maybe it's the first. The voters' decisive support of his reforms will embolden politicians of both parties to move forward on measures that are essential to bail out bankrupt states and cities. It's also a wake-up call to progressives, who are realizing that they can no longer count on public support to maintain the unsustainable entitlements of government employees.

It all started when Mr. Walker, a Republican, introduced a "budget repair bill" to attack the state's $3.6-billion budget gap. The bill drastically weakened the collective-bargaining process for public employees. It also made union dues voluntary, not automatic. The backlash was ferocious, and his opponents engineered a recall vote.

Wisconsin is a purple state – a mix of red and blue – and the recall campaign has been bitterly divisive. Lifelong friends stopped speaking to each other. Anti-Walker forces and liberal media portrayed the fight as a massive right-wing attack on everything that's right and good. But lots of people approved of the reforms, which included a requirement for public-sector workers to start making reasonable contributions to their health care and retirement plans. Local governments and school boards also have new latitude to renegotiate contracts. According to the governor's office, the changes have saved $1-billion.

Public-sector unions are very different from private-sector unions, because governments have no incentive to negotiate very hard. They're happy to promise good pensions and job security in exchange for union support. The conflict of interest is inherent, and the loser is invariably the taxpayer. But now that the bills are coming due, the taxpayers are discovering how ruinous those promises really are. Illinois has an unfunded liability of $83-billion in government employee pensions. In San Diego, payments to the city's retirement fund make up 20 per cent of the city's budget. According to the Pew Research Center, state governments owe more than $1-trillion to public pension and retiree health-care programs. Across the country, libraries and school lunch programs are on the chopping block to pay the pension bills for government retirees.

These problems cross party lines. These days, Democrats like New York Governor Andrew Cuomo are also taking on the unions. Here in Liberal Ontario, even Dalton McGuinty has realized, all too belatedly, that something's got to give. It's not about politics any more. It's about the math.

Smart progressive politicians realize the only way they can protect public programs is to make government as economical and efficient as possible. They also realize that public unions are in serious need of reform. It's increasingly hard to defend teachers unions that insist on laying off talented young teachers because seniority is sacred, who protect incompetents and misfits from being fired, then use their members' union dues to help elect politicians who will defend the status quo. Even teachers aren't that fond of teachers unions any more. According to research by a group of Harvard education experts, only 43 per cent of U.S. teachers feel positive about their unions.

It's easy to see why public-sector unions everywhere are in a panic. When union dues are made voluntary instead of automatic, a lot of people stop paying. Since last year, membership in some of Wisconsin's biggest public unions has dropped by more than half. And the more toothless they become, the less reason there will be for people to join them.

For all the bitterness and rancour of Wisconsin's recall election, the citizens were passionately engaged. The turnout was extremely high. And the results are a hopeful sign for the rest of us. The biggest challenge of Western democracies today – from Greece and Italy to Wisconsin and Ontario – is that people vote themselves more entitlements than they can afford. Politicians (of all parties) get elected by promising that we will never really have to pay. The result is that liberal democracies find it almost impossible to reform themselves. Wisconsin shows it might be possible after all. 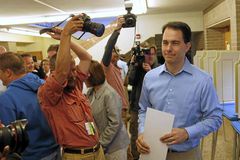