For much of the late 2000s, Turkey hoped that a booming economy, the prestige of combative Prime Minister Recep Tayyip Erdogan and a burst of regional admiration for its successful mix of Muslim governance and democracy would reap it a harvest of Middle Eastern influence and profit.

At the heart of this strategy was an intimate relationship with the Syrian regime of Bashar al-Assad, the model for Turkey's "zero problems" policy. The two countries signed model deals for visa-less travel, free trade and infrastructure integration. The leaders brought half their Cabinets to summit meetings. The Assads even lunched with the Erdogans on the eve of their 2008 holiday on the Turkish riviera.

Now the Syrian catastrophe has landed squarely on Turkey's doorstep: 450,000 refugees, with the UN predicting double that by year's end; costs of $1-billion and rising to look after the influx, only a tenth of which is covered by outside donors; and increasing tensions on the border. A recent Syrian air force raid close to one Turkish border crossing killed five Syrians, wounded 50 people, hit an aid warehouse and an opposition base. Just days later at another border crossing, Syrians wanting to cross rioted, fired weapons and killed a Turkish policeman, wounded 11 other people and burned buildings and cars.

As regional instability has spread since 2010, Turkey's Middle Eastern position has suffered too. The Libya war badly disrupted Turkey's big contracting interests there. The loss of Syrian trucking routes to regional markets has joined the previous loss of Iraqi ones. Ankara's backing of armed Syrian opposition groups has encouraged negative perceptions of Turkey acting not just as a would-be Sunni Muslim hegemon, but also as taking sides within the Sunni Arab world. Arab and Iranian commentators are critical of what they see as Ankara's hubristic tendency to seek what they see as Ottoman-style regional dominance.

These Middle Eastern entanglements are clearly not principally Turkey's fault, but some of Ankara's policies have made things worse. At the height of its Middle East hopes – which were indeed accompanied by a substantial rise in trade with a region that takes a quarter of Turkey's exports – Turkey repeatedly snubbed its much bigger investor and principal trading partner, the EU. Mr. Erdogan made emotional attacks on Israel, seeking domestic and regional popularity but losing a valuable image of regional neutrality. And the intensity which Mr. Erdogan switched policy to calling for Mr. Assad's ouster in August, 2011, painted Turkish policy into a corner.

Ankara is now adjusting course in some areas. When the Syrian war got under way, Turkey quickly sought to calm popular alarm by bringing in Patriot missiles from its North Atlantic Treaty Organization allies. After years of stalling Turkey's EU relationship, Mr. Erdogan is now visiting more EU states and nudging membership negotiations forward. Under intense U.S. pressure ahead of a May 16 trip to Washington, Mr. Erdogan also partly patched up his row with Israel by accepting an Israeli apology for Israel's killing of eight Turkish citizens and Turkish-Americans trying to bring aid to the Palestinians in Gaza in 2010.

In fixing the overspill from the Syria crisis, however, much remains to be done. Certainly, the principal Western donors should be much more generous to Turkey, and engage effective Turkish humanitarian organizations, but Turkey also has to streamline its procedures to allow reputable, international NGOs to work. Turkey can hardly complain about a lack of Western aid when it has only registered three aid groups – thus allowing them bank accounts, to hire personnel, to get residence permits – since the crisis began two years ago.

Turkey is indeed a leading Sunni Muslim state, and a progressive one, but making Sunnism a key element of policy has become an element of polarizing tension both in the region and also for the 10 per cent of Turkey's population who are heterodox Alevis. Turkey has long experience in its regional rivalry with Iran, but should work hard to avoid any gratuitous deepening of what could become proxy conflicts over Syria or Iraq. It should set up any new refugee camps well away from the border to avoid the impression that they are being used as rear bases.

Syria has already become a failed state, the Syrian conflict may still escalate further, and the crisis so far has shown that Turkey alone does not have the power to impose any solution, diplomatically or militarily. Even if the world does more to arm the Syrian opposition, this looks unlikely to topple the Assad regime. Ankara would therefore do well to abandon its wishful thinking about a quick resolution of the Syrian catastrophe, defend its vital interests with quieter rhetoric, continue rebuilding its frayed relations with traditional Western allies and adopt a realistic, medium-term strategy that balances its natural position between west and east.

Hugh Pope is director of International Crisis Group's Turkey/Cyprus Project, and author of Turkey Unveiled: A History of Modern Turkey, Sons of the Conquerors: the Rise of the Turkic World, and Dining with al-Qaeda: Three Decades Exploring the Many Worlds of the Middle East.

Opinion
Bombs are blasé amid Turkey’s explosion of success
February 6, 2013 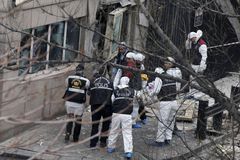