In recent weeks, Indigenous Services Minister Jane Philpott has really begun to put her stamp on the new portfolio, with some strong words and some even stronger actions.

Among other things, she delivered a strong rebuke of Manitoba's planned reforms to the child welfare system, took journalists to task for "sloppy" reporting on Indigenous issues, started a fundamental reform of how Ottawa delivers funding to First Nations, and put an ambitious timetable in place for dealing with the persistent problem of the lack of safe drinking water in many First Nations communities.

Much was expected of the Trudeau government on the Indigenous file. But for the first two years of its mandate, Ottawa has spent far more time promising action and apologizing for inaction than actually acting.

So it's refreshing to see Dr. Philpott roll up her sleeves and start delivering some concrete initiatives, along with some sharp elbows.

A key role of the Indigenous Services Minister is to push her own government, the provinces and territories, and the public to acknowledge and confront systemic failures.

One of the most urgent issues that needs to be dealt with is child welfare, which Dr. Philpott has rightly described as a "humanitarian crisis."

There are more Indigenous children in state care today than were in the infamous residential school system, and the result is the same – the suffering of children, the destruction of families and the loss of culture and language in communities.

Under the current system, child welfare agencies get funding based on how many First Nations children they place in care, which creates a perverse incentive.

That is being replaced by a system of block grants, but also with subsidies for guardianship, which could encourage the removal of Indigenous children from their communities and permanent placement with non-Indigenous families.

She has also called a meeting of all the provinces and territories later this month to discuss the state of child welfare.

One of Dr. Philpott's most welcome actions is to finally get Ottawa to comply with a Canadian Human Rights Tribunal ruling related to Jordan's Principle. (Named after a severely disabled five-year-old First Nations boy who died while the federal and provincial government bickered over who should pay for the medical costs of moving him to foster care, it holds that children should get equal access to care whether they live on or off reserve and the "government of first contact" should foot the bill.)

After a decade of dithering and denial, Health Canada has approved more than 29,000 requests in recent months, most for children with disabilities and mental-health issues.

The minister has also criticized a number of media outlets – in interviews and on Twitter – for reporting that Ottawa is still in non-compliance of the human rights tribunal order and for perpetuating "myths of despair."

Dr. Philpott has also vowed that all boil-water advisories in First Nations communities will end by March, 2021, a promise that will take an estimated $1.8-billion to fulfill.

So far, the number of boil-water advisories has fallen to 67 from 77 under her watch. That's a start.

But perhaps the boldest shift of all has been in funding.

When the Liberals took power in 2015, they stopped enforcing the First Nations Financial Transparency Act, a patronizing law adopted by the previous Conservative that forced First Nations communities to issue all manner of financial disclosures. Communities had to file an average of 130 reports a year, often to half a dozen departments, to get federal dollars to which they are entitled.

But, in a move that garnered little media attention, Dr. Philpott has started to forge a new fiscal relationship with more of a nation-to-nation tone. First Nations with good financial records will now get guaranteed 10-year funding, fully indexed, and with little paperwork. Rather than be wards of the state, we will see the emergence of more autonomous First Nations.

The Liberal government has to be willing to put their money where their mouth is and actually give life to the principles and promises they espouse.

Let's hope Dr. Philpott will be given free rein to continue down this path, even if it puts a few noses out of joint.

Globe editorial: This is what reconciliation can look like
December 28, 2017 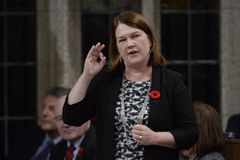 Opinion
Ottawa continues to fail Indigenous children
June 6, 2017
Follow André Picard on Twitter @picardonhealth
Report an error Editorial code of conduct
Due to technical reasons, we have temporarily removed commenting from our articles. We hope to have this fixed soon. Thank you for your patience. If you are looking to give feedback on our new site, please send it along to feedback@globeandmail.com. If you want to write a letter to the editor, please forward to letters@globeandmail.com.
Comments are closed