DEREK BURNEY and FEN OSLER HAMPSON
Contributed to The Globe and Mail
Published May 25, 2015 Updated May 15, 2018

Derek H. Burney was Canada's ambassador to the U.S. from 1989-1993. He was directly involved in negotiating the free-trade agreement with the U.S.; Fen Osler Hampson is a distinguished fellow and director of Global Security at the Centre for International Governance Innovation and Chancellor's Professor at Carleton University. They are the authors of Brave New Canada: Meeting the Challenge of a Changing World.

The fall of Ramadi in Iraq and the ancient city of Palmyra in Syria underscore that the battle to defeat or at the very least contain Islamic State is in complete disarray. It is also apparent that Iraqi Prime Minister Haider al-Abadi is faring little better than his predecessor in attempting a more inclusive approach toward Iraq's religious minorities. Only this time, the opposition is coming from within the ranks of Iraqi Shiites, who feel that Mr. al-Abadi has been too accommodating towards Iraq's Sunni minority groups. Iran's direct backing of Shia militias is intended to counter the woeful performance to date of Iraq's army but it also undermines further the authority the al-Abadi's government.

As Iran flexes its muscles in Iraq, Syria, and Yemen, U.S. President Barack Obama's efforts to rally key Gulf states behind U.S. nuclear talks with Iran and an impending agreement fell just short of a complete disaster. The U.S. Summit at Camp David was noteworthy more because of the absence of three of the seven Gulf leaders, including King Salman of Saudi Arabia, than from those in attendance. If the purpose was to assure the Sunni leaders of the Gulf States that the nuclear framework agreement with Iran will not undermine continued U.S. support for the security of its Arab allies, the body language and the statements emerging at the conclusion of the meeting suggested otherwise.

When asked pointedly whether the Gulf rulers had endorsed the framework, President Obama sidestepped saying that, as there is not yet a final text, he was not in a position to seek support for an agreement still to be concluded. Meanwhile, however, his Deputy National Security adviser, Ben Rhodes, assured reporters that the evolving agreement had "huge international support."

Unquestionably, an agreement that would prevent a nuclear armed Iran and is comprehensive, verifiable and enforceable would be a boon to civilization. The objective is laudable but doubts persist about the durability of the accords, which are supposed to be completed by the end of June. At best, the agreement will be a short-term stopgap measure that temporarily suspends but does not halt Iran's nuclear ambitions. Many experts doubt whether they can truly be verifiable or enforceable in the long run, especially after sanctions are lifted and Iran's economy rebounds. Iran's neighbours worry that the easing of sanctions will simply facilitate more antics by Iran and its allies – from Hezbollah in Syria to Hamas against Israel and now the Houthi in Yemen. An agreement that leaves Iran on the nuclear threshold, even with a warning system that would sound the alarm if it tries to cross it, will now simply spur Saudi-Arabia, Egypt and possibly Turkey to develop their own nuclear capabilities in a highly combustible Middle East.

When asked what assurances he gave the Gulf leaders in the event that Iran welched on the agreement, the President danced diplomatically away from offering a direct guarantee. In such a circumstance, he said, the U.S. would act "as appropriate". Given vanishing red lines, it was less than reassuring.

The Summit discord at Camp David is yet another symptom of a steady decline in U.S. global credibility. On many fronts, America seems like Gulliver beset by multiple Lilliputians.

The Minsk accord on Ukraine and the agreement with Russia on Syrian chemical gas are being openly flouted. Meanwhile, China aggressively flaunts its territorial ambitions in the East China Sea just before a visit to Beijing by the peripatetic Secretary of State, John Kerry. Many firm U.S. allies ignore Washington's plea and sign on as founding partners of China's Infrastructure and Investment bank (the AIIB). North Korea's leader boasts about his country's new ability to launch a nuclear intercontinental missile against the United States. Putative NATO ally Turkey orders weapons from China while Russia and China carry out naval exercises in the Mediterranean. Certainty and stability are in short supply.

Problems at home and abroad did not start with the Obama presidency but we can only hope that America will find its feet and much-needed confidence after the 2016 election. When it comes to global leadership, there is no second choice or preference.

Iranian Revolutionary Guard leader says US has ‘no will’ to fight Islamic State group
May 15, 2018 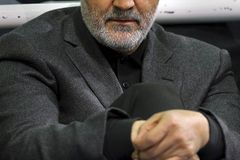