The comedy industry should certainly be giving thanks to Anthony (The Mooch) Scaramucci, and so, too, should the Republican Party. So, too, should Donald Trump. The Mooch might turn out to be the best thing that never happened to him.

"A great day at the White House," Mr. Trump tweeted following the latest upheavals, including the Mooch's rapid execution. He could be right. It could turn out, in terms of management style, to be a turning point for the White House.

At the House of Trump, chaos had reached critical mass, Mr. Scaramucci's plutonium-enriched persona being the prime cause. His smut-laden rampage in a New Yorker interview, besting even the President's normal ribaldry, was wrenching enough to finally and critically make real change happen, it being the appointment of retired Marine Corps general John Kelly as chief of staff.

In the scattershot, morally bankrupt Trump world, there will now be, for the first time, a chain of command. Things should get better not only because the bar is so low they can't get much worse, but because adolescence has been derailed.

As a military man, Mr. Kelly will bring discipline. Frogmarching the Mooch out the door was the perfect opening gambit, establishing his authority. Reince Priebus, the former White House chief of staff, was a welterweight. Competing power centres blossomed all around him, chewed him up, spit him out. The grenade-hurling Mr. Scaramucci's first act was to blow up Mr. Priebus before thankfully detonating charges under himself.

Not insignificantly, he also humiliated Stephen Bannon, the alt-right impresario whose clout has been shrinking steadily. Mr. Kelly is no fan of Mr. Bannon and his crew of white nationalist America-firsters, which is another reason why things should get better. Conventional thinkers now hold more sway. Rationalism has a chance.

There's another reason why this past week should be seen as a critical juncture. It was the week that Congress Republicans finally got the message through to Mr. Trump that they are not going to take it any more. They forced him to back down on his intention to fire Attorney-General Jeff Sessions for the senseless reason of his doing the right thing in recusing himself from the Russian-meddling investigation. They put him on notice that any intent to torpedo the inquiry of FBI director Robert Mueller on Russian collusion would be suicidal. As well, three Republicans came forward to defeat his bid to repeal and/or replace Obamacare.

Mr. Trump can't go on the way he has been. He is the oddest of leaders in that while others seek to avoid controversy, he seeks to create it. He revels in the havoc and the storm. Mr. Scaramucci was viewed, given his brashness, his vulgarity, his ego on stilts, as a mini-Trump. Had his appointment as director of communications taken hold, it would have buttressed and augmented all of the President's seething quixotic tendencies.

It's no sure bet that Mr. Kelly may be able to rein them in. In his work as head of Homeland Security, some were dismayed at how readily he sided with Mr. Trump's attitudes on immigration. He curried too much favour, they say. No small wonder the President likes him so much.

But Mr. Kelly, widely experienced in Washington, has a mandate to bring order, which is what military men do best. Two other generals, national security adviser H.R. McMaster and Defence Secretary James Mattis, both no-nonsense individuals, will likely see their clout enhanced.

For all his madcap proclivities, Mr. Trump is sometimes capable of listening to reason. He didn't rip up the Iran nuclear deal or the North American free-trade agreement, lift sanctions against Russia, or move the Israeli embassy to Jerusalem. As for the Mexican wall, Mr. Kelly has been pushing him to back off. He may get his wish.

On all these issues, rationalists have made headway. They were able to do so in getting Mr. Trump to fire the Mooch as well. That decision, which required seeing the scars in someone with a similar persona and modus operandi as himself, may be a sign that his presidency is not a hopeless cause. 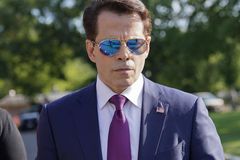 Republicans call on new chief of staff John Kelly to fix White House chaos
July 30, 2017
John Kelly wins praise across the aisle, but bigger task is ahead
August 1, 2017
Follow us on Twitter @globedebate Opens in a new window
Report an error Editorial code of conduct
Due to technical reasons, we have temporarily removed commenting from our articles. We hope to have this fixed soon. Thank you for your patience. If you are looking to give feedback on our new site, please send it along to feedback@globeandmail.com. If you want to write a letter to the editor, please forward to letters@globeandmail.com.
Comments