Historically, women have been extremely good at taking lemons and making lemonade, not to mention lemon-meringue pie, lemon gin and enough lemon cupcakes for the entire third-grade class (plus teacher).

On the face of it, the harassment that women face online and on the streets could seem like a painful, soul-destroying consequence of being female in this world. But come on, people! Let's turn those frowns upside-down. Think of the fun that could be had when you're forced inside by the trolls on the street corner and on Twitter, and are sitting in a corner staring at your computer as if it were a prop from Paranormal Activity.

You could decoupage a nice refrigerator box to wear if you ever decide to leave your apartment again. The street-harassment-awareness group Hollaback reported last year that more than half of Canadian respondents to its survey had changed their dress or travel patterns to avoid unwanted attention in public, so really you're part of a trend. Embrace it, girlfriend.

Or, since you're told to "ignore" the vile comments on social media – including, but not limited to, threats of death, dismemberment and rape – you could take this opportunity to perfect methods of communication that are guaranteed troll-free. Two Dixie cups and a piece of string is a sassy and effective way of talking to people a few feet away, and failing that, you could always write on a chalkboard and hang it out a window. This will delight passersby and win friends of all ages, though your boss might not completely understand.

Or perhaps we could learn from Leslie Jones, and decide not to spend eternity doing needlepoint in lead-lined boxes while the goblins dance around their victory fires. Ms. Jones is the superb comedian, star of Saturday Night Live and the current Ghostbusters remake, who was subject to a torrent of depraved racist and sexist abuse on Twitter this week. I'd fill you in on the details, but I worry you're eating breakfast.

Twitter, which generally moves at the speed of a crippled cruise ship on these things, rose to the occasion, shutting accounts and banning one of Ms. Jones's main tormentors (whose name I will not mention because publicity is his oxygen). I suspect the high-profile nature of the incident caused the quick response; Twitter couldn't afford not to take action. Ms. Jones was distraught, to judge by her tweets, and left the platform for a few days, but returned by the end of the week, "because who else is gonna live tweet Game of Thrones"?

The troubles in Westeros aside, I have a feeling Ms. Jones is back on Twitter because she likes it, finds it useful and is more than a little irritated at being harassed. "Stop saying ignore them or that's just the way it is," she wrote as the abuse piled up, "cause that's bullshit." Telling women to ignore the online dimensions of their lives is like telling someone to never use the telephone 30 years ago. It's the water we swim in, and if it's full of sharks, then we need to do a better job repelling them.

It was heartening, this week, to hear Status of Women Minister Patty Hajdu talk about tackling online harassment as part of the federal government's planned strategy on violence against women: "From my perspective, this is the Wild West of communication, where there are very few rules and very few avenues for people experiencing violence – women and girls in particular, who are disproportionately the victims of this type of violence online," she told the Toronto Star.

What's particularly encouraging is the acknowledgment that this is run-of-the-mill bad behaviour, aimed at average women who don't have the luxury of a direct message from Twitter's chief, Jack Dorsey.

Stories of abuse that make it to the public eye are often ones aimed at high-profile women such as Ms. Jones, or politicians such as Canadian Conservative MP Michelle Rempel or British MP Jess Phillips, who were both threatened and targeted online (resulting in a criminal conviction, in the case of Ms. Rempel's harasser).

What we don't hear much about is the corrosive effect of this gendered violence toward average women. How many have fled social-media platforms, having been called slut, whore or bitch one too many times? Or had their private information leaked onto the Web?

Ms. Phillips was subjected to hundreds of rape threats last month, when she expressed the earth-shaking notion that misogyny had no place online, using the hashtag #ReclaimTheInternet. She reported the abuse and got no help. The Labour MP wrote, "It is persistent, illegal harassment, specifically designed to harm and silence me – and worse, to do the same to the people who interact with me."

I'm glad to say Ms. Phillips, Ms. Rempel and Ms. Jones are all still on Twitter, and the online world of politics, banter and, yes, Game of Thrones is better for it. They refused to be chased out the door.

Harassment, whether it happens on the street or on your phone, thrives in darkness. It thrives when people turn away from it, pretending that it's harmless or a joke. We have years of evidence to show it does not go away when it's ignored. If it did, there would be no cat-calling on the street and bitch-talking on Twitter. Don't ignore the trolls – they're small in every way and can be crushed with a word. 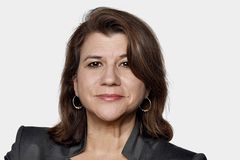 Opinion
After Ghomeshi, all the more reason to focus on workplace harassment
May 12, 2016