Out in rural Ontario, far away from the lush grounds of Queen's Park, a crisis is brewing. Electricity rates have soared so high that many people can't afford to pay their hydro bills. Local charities have a name for it: energy poverty. The problem is so bad that they've set up relief funds to help protect families from the threat of disconnection.

No wonder Kathleen Wynne, Ontario's Premier, is running for cover. The Liberal government's energy policy has been a disaster for lower-income citizens, especially in rural areas, where delivery charges are significantly higher. Many rural households now face hydro bills of $400 or $500 a month – double what they were 10 years ago. As the big thinkers in Toronto bask in air-conditioned bliss, more and more folks are struggling to cover both the hydro bill and food.

"People have become obsessive," says Francesca Dobbyn, who is head of the United Way for Bruce and Grey Counties. "They're sitting in the dark. They're walling off part of their homes. They're unplugging the stove, the kitchen clock, the microwave." Sadly, utility providers (which disconnected 60,000 customers last year) aren't especially sympathetic. "They told one woman to tell her kids to stop playing Xbox."

With sky-high hydro rates and other political calamities on her plate, Ms. Wynne desperately needs to jolt her government's approval ratings back to life before the next election. On Monday, she promised to axe the provincial-sales tax on electricity for everyone. She also promised to cut rural rates by making urban customers pick up some of the higher delivery costs. Ms. Dobbyn says it's a "great start."

Whether it's a long-term solution to our energy woes is another matter. Ontario's energy poverty afflicts the whole economy, not just the poor. This poverty is largely policy-induced – the consequence of megalomaniacal green schemes that have transferred billions of dollars from taxpayers to purveyors of wind towers and solar panels. Even as the costs of solar plummeted, the prices paid to contractors did not. Lucky players got rich quick.

Meanwhile, partly because of conservation, electricity demand has fallen over the past decade. Ontario now produces vastly more power than it needs, or will need for many years. That hasn't curbed the government's enthusiasm for plunging even deeper into wind and solar. Today we're paying big bucks to generate power we will never use, and paying again for the U.S. to take it off our hands.

The irony of such reckless mismanagement is exquisite. Because the overall costs of the system are largely fixed, lower electricity use won't drive down rates. In fact, the less hydro we use, the more expensive per unit it gets. Wash your clothes at midnight if you want, but the cost of hydro is going to go up anyway.

Saving the sales tax will be nice, of course. But the government still has to pay for all those hospitals and schools, so it's going to have to get that money from somewhere else. As any economist will tell you, across-the-board cuts (subsidies) to energy costs are always a sop to the rich, since the well-off consume a greater share of power to run their 4,000 square-foot McMansions. This plan is expected to drain $1-billion from provincial coffers. It's a shell game they're playing. It's still your pocket that's being picked.

The Wynne government loves to bask in the virtues of "sustainable" energy. But its deranged pursuit of green energy at any cost – dating back to the days when Gerald Butts, Justin Trudeau's BFF, was cutting his teeth at Queen's Park – is not economically sustainable at all. Electricity prices in Ontario are rising faster than anywhere else in North America. Many experts, including Bank of Montreal chief economist Doug Porter, warn that soaring hydro rates are among the biggest threats to the provincial economy. "Let's just say it is going to do very serious harm to the Ontario economy if we continue to see double-digit increases in electricity rates," he told Global TV.

At least there is a certain transparency to hydro rates. But soon, the Wynne government will introduce cap and trade in an attempt to lower carbon emissions. Cap and trade will be a black hole where all light vanishes and the real costs are unknown. As the sweltering masses switch off their fans in hopes of saving money, the progressive policy engineers at Queen's Park will be patting each other on the back once again. They've never met the masses. But they're sure they know what's good for them. 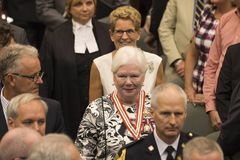 Opinion
How low can the Ontario Liberals go? Just watch them
August 31, 2016