In The Forgotten Queens of Islam, Fatima Mernissi provides a study of 15 Muslim women, from the Arab world to South Asia, who ruled during the medieval period of Islamic history.

Two of the more successful rulers hailed from Yemen: Asma and Arwa, each bestowed with the title "al-sayyida al-hurra," meaning "noble lady who is free and independent; the woman sovereign who bows to no superior authority," according to Ms. Mernissi.

The land of Yemen has once again borne the fruit of female leadership, in the person of Tawakkul Karman, 32, one of three recipients of the 2011 Nobel Peace Prize.

Ms. Karman, a mother of three, has been the catalyst in the uprising against President Ali Abdullah Saleh. At 26, she founded Women Journalists Without Chains, an NGO devoted to journalistic independence, which had been repeatedly closed by Mr. Saleh. Since 2007, she has led peaceful weekly protests against the dictatorship, enduring threats, beatings and imprisonment. But she has never backed down, striving for a society where citizens can live with dignity.

Ms. Karman is also a woman of faith, striving for social justice as a pillar of her belief. She belongs to the Islah Party, which seeks societal change within an Islamic paradigm. Yet, she has defied the powerful clerics within Islah, opposing their endorsement of child marriages. She has defied convention in a deeply conservative society by speaking in public, by organizing men and women and by taking a leadership role in a non-violent uprising.

Her courage transcends Yemen's borders. In June, The New York Times published her call for the United States to abandon its "misplaced investment in the old regime's security apparatus, which has killed more innocent women and children than terrorists," asking that it "respect international standards on human rights and the Yemeni people's rights to freedom and justice." She also demanded that Saudi Arabia stop meddling in Yemen's affairs out of its own fear of popular change.

In spite of the government's violent crackdown, Ms. Karman has insisted on a non-violent response, inspired by the examples of Mandela, Gandhi and King.

Her example subverts assumptions on both sides of the East-West divide.

The first is the Western assumption that Muslim women are meek, oppressed by Islam and in need of rescue. In fact, Muslim women have protested alongside men in the Arab spring, enduring hunger strikes, beatings and imprisonment. Egyptians Esraa Abdel Fattah and Asmaa Mahfouz, and Tunisian Lina Ben Mhenni, were instrumental in their countries' respective uprisings; all three were Nobel Prize nominees.

Second are Muslim cultural paradigms that cast women as weak, deferential and incapable of leadership. Ms. Karman has inspired a generation of Muslim women to follow their beliefs for the greater good, and to ignore personal attacks by those in power – be they presidents or clerics.

Then there is the example of Mohamed Al-Nehmi, Ms. Karman's husband. Here is a man, in a patriarchal culture, who is his wife's ardent supporter and co-activist. He has withstood withering criticism, admonishment and violence for his position. Partnership, rather than control, in marriage is anathema in many Muslim cultures. Mr. Al-Nehmi's example should be publicized widely.

Finally, we must reconsider the views that the West has nothing to offer, or has the best solution, to political malaise elsewhere. A column in The Huffington Post describes Ms. Karman's 2009 U.S tour of grassroots organizations, where pluralism, activism and citizen engagement made a lasting impression on her. These democratic ideals will not simply be grafted, but implemented within an indigenous context, where religion plays a powerful role in society.

In 2011, the model Muslim revolutionary is not a suicide bomber but a woman armed with faith, courage and an unshakable commitment to non-violence.

While the Nobel is quite an achievement, Ms. Karman has her eyes on the real prize: a just society, where human dignity and freedom reign.

The queen is forgotten no more. 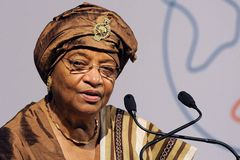