A lot of people have been talking about how immigration is changing Canadian politics. There's a good reason for that. We've brought the equivalent of two new Torontos into this country over the past 20 years. Millions of immigrant voters – especially affluent immigrant voters living in suburbs – now hugely influence the outcome of elections. If you want to win government, you have to figure them out.

This is what we explore in our book The Big Shift: The Seismic Change in Canadian Politics, Business and Culture and What it Means for Our Future. It is also the theme of an opinion piece attacking our book published last week in The Globe and Mail. It was written by pollsters Michael Adams of the Environics Institute and Robin Brown of Environics Research Group.

They claim, for example, that we believe that immigrants are economically and socially conservative, and so vote Conservative. The truth, they retort, is more complicated than that.

But that's not what we said. What we did say is that well-established immigrants – those who have been in Canada 10 years or longer, who are doing well and who have migrated to middle-class suburban communities – are more likely to vote for the Conservatives than for any other party. Recently-arrived immigrants, especially if they are still struggling to gain a foothold, are less likely to vote Conservative.

To be more specific, we say that established, middle class, suburban immigrant voters in Ontario care a lot about economic growth, they incline toward smaller government, and they are big on law and order. They share these priorities with rural voters and voters in the West. Stephen Harper's strong commitment to these priorities allowed him to forge a winning coalition. But those votes are also available to progressive politicians, if they can find the right message.

In support of that assertion, we reference the Ipsos Reid 2011 Election Day survey of 40,000 voters, which details the attitudes, values and priorities of both immigrants and native-born. Mr. Adams and Mr. Brown cite, in contrast, a single opinion survey and a few focus groups that they conducted for the Broadbent Institute.

But if survey evidence isn't to your taste, then you can find your proof in the pudding: Suburban ridings with high concentrations of established, foreign-born voters overwhelmingly went Conservative in the last election.

Mr. Adams and Mr. Brown throw up another claim: Immigrants, they assert, value Canada's dynamic, pluralistic culture more than just the opportunity to get ahead economically. "Time and again, we hear immigrants extol things that might be considered progressive values – including Canadian-style pluralism – as they acculturate to life in their new country," they write.

But although we wouldn't be caught dead using a word like "acculturate," The Big Shift repeatedly cites our diverse and tolerant culture as both a competitive advantage and a defining virtue.

Mr. Adams's and Mr. Brown's research suggests that many established immigrants place a strong emphasis on quality-of-life issues; they are willing to see governments get bigger to address those issues; they support the labour movement and want to see more controls on business. They are actually less likely than native-born Canadians to vote Conservative.

The truth is, the Environics research and the research we cite in The Big Shift simply conflict. We think they're wrong. But maybe we're wrong. If so, then the NDP and the Liberals should listen to Mr. Adams and Mr. Brown. They should appeal to established, suburban immigrant voters by promising new regulations and taxes for business, new measures to strengthen unions, and new programs and services delivered by bigger government.

Of course, that's what the NDP and the Liberals promised in the last three elections, and we all know how that turned out. So we'll stick with our book. At least it fits with the facts.

Darrell Bricker is president of Ipsos Reid Public Affairs. John Ibbitson is a Globe and Mail journalist, currently on leave. 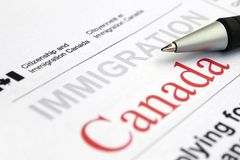