The big data boom has created an insatiable need for tech talent, but studies show that there aren't enough skilled workers to go around.

According to one report, the Information and Communications Technology Council's Labour Market Outlook 2015 to 2019 report, 182,000 information technology jobs will need to be filled by 2019, a number the country likely can't meet.

However, some companies are finding novel ways to address this skills gap, including SAP SE, a global enterprise software company. How? By inviting people on the autism spectrum to join its work force.

In 2013, SAP launched Autism at Work, an initiative designed to help the company meet its hiring goals, and SAP Canada was one of a few locations to pilot the program. The organization has committed to hiring 650 autistic individuals worldwide by 2020, which will help to alleviate the skills crunch here in Canada.

Kirsten Sutton, Vancouver-based managing director for SAP Labs Canada, a research and development arm of the company, welcomes the move.

"There are tech jobs to fill and people on the autism spectrum have the skills to fill them. We're tapping an untapped talent pool which will become even more important as the number of Canadian tech jobs increase," she explains.

"Weʼre bringing in a group of people that maybe others had overlooked in the past who are accelerating our innovation and our productivity."

Engaging people on the autism spectrum means taking a different approach to recruiting, interviewing and bringing new employees on board.

To help it rethink its hiring practices, SAP partnered with Specialisterne Canada, a not-for-profit organization that has created a model for recruiting, training and supporting people on the autism spectrum, as well supporting their managers and teams.

Specialisterne Canada might begin by looking at online applications with an eye to seeing past inconsistencies in an applicantʼs experience or education.

"They may not have had the opportunities to build out a résumé like the one that their competitors might have, and so they donʼt get that chance to even get to the interview," explains Specialisterne Canada chief executive officer Alan Kriss.

Rather than invite candidates to a standard job interview, an outside organization, working with SAP Canada, brings them in for an interactive workshop. For SAP Canada, candidates get to build a programmable robot to determine if they might be a good potential employee.

"We work with them for some time and get to know them, so that instead of asking them how they work, we just get to see how they work," Mr. Kriss explains. 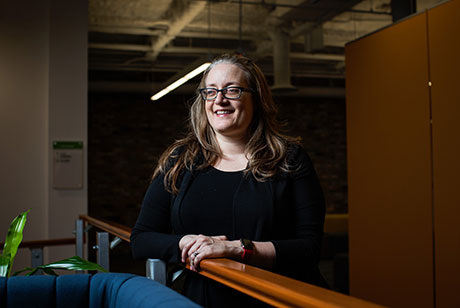 The process gives hiring managers information they need to recruit people who are a good fit for any open roles, he says.

Ms. Sutton notes that employees recruited through the Autism at Work program are extremely talented and productive, thanks in part to their enthusiasm for software.

"They have an ability to recognize patterns, they have an attention to detail like no other, and theyʼre able to persevere for periods of time with a single task," she says.

But the process does not end there. After joining SAP Canada, individuals are provided with a job coach from an autism support organization. In Vancouver, it's someone from Pacific Autism Family Network. The coach works intensively with the employee for the first several months to make sure they continue to learn and grow, and become more comfortable, Ms. Sutton explains.

The coach also helps the employee's team with the transition. Autism at Work participants are assigned an SAP Canada staff member on their team as a mentor they can turn to if they have questions. This person also helps them integrate socially.

In some instances, it requires a larger front-end investment than traditional recruitment, Mr. Kriss concedes, but Ms. Sutton makes it clear that it's not an onerous one.

"Itʼs definitely a focused effort to make sure that we have the right support system in place, but itʼs not an enormous amount of accommodation required," she says.

Beyond filling roles, Ms. Sutton says bringing more people on the autism spectrum into the company has also widened the possibilities of what the company can do.

"The more inclusive we are, the more we bring in different points of view, the more everybodyʼs mind opens up and the more creative [are the] ideas that come," she says.

"Often, it's the case that they see the world differently," Mr. Kriss says of the candidates his organization has worked with so far. "And because they see and interact in the world differently, they just have a different way of solving problems or approaching work than the average person – and thatʼs beneficial. Sometimes it could be some special strength, talent or passion that the candidate brings to their work that makes them the right fit for the job."

Over all, Ms. Sutton is thrilled with the Autism at Work program and what it's brought out at SAP Canada.

"One of the guys said, 'Here, I wouldnʼt be afraid to tell anybody that Iʼm on the spectrum,'" she says. "So, for me, weʼve created an environment where people feel like they can be themselves."

Download the IDC report for more information on how Canada is waking up to digital transformation.

This content was produced by The Globe and Mail's Globe Edge Content Studio, in consultation with SAP. The Globe's editorial department was not involved in its creation.