Today, thanks to the heroic efforts of many Canadians—from the Friends of Laura Secord to local municipalities and trailblazers (literally)— any nature lover can walk the Laura Secord Legacy Trail with none of her fears and all of the pleasures.

Last spring on June 22, exactly 200 years to the day since Laura Secord "walked out her door and into Canadian history," our small group joined the commemorative celebrations honouring Canada's most famous female war heroine. It didn't take long before we realized that this plucky wife and mother, who trekked for 17 hours to alert the British of an impending enemy attack, had one heck of a hike! As we set out just halfway along the newly established Laura Secord Legacy Trail, a 32-km-long trek from Laura Secord's home in Niagara's Queenston to Captain John DeCew's House in Thorold, it soon became clear how extraordinary were her achievements.

By mid-morning, a scorching sun was bearing down on us. Within hours of traversing over muddy footpaths and country trails, and down into meadows sprinkled with purple and pink wildflowers, we were already tiring. Unlike Laura, we had not been hiking since 5:00 a.m. We were wearing hiking boots, not slippers. We had sunscreen—and mosquito repellent for the woods up ahead. Even better, the rattlesnakes and cougars that proliferated the forests, meadows and marshes of 1813 were nowhere near our radar screens!

Within a couple of hours of her walk, Laura had already crossed Four Mile Creek, stopped in the outskirts of St. David's at her sister-in-law's mill, and discovered that her brother Charles was too ill to take the message on horseback for her. Later, along the mid-section of the hike, she rallied her niece Elizabeth to accompany her. But by the time they reached Shipman's Corner (in present-day St. Catharines), Elizabeth was too exhausted to continue—so Laura persevered alone through the bush.

For us city dwellers, continuing upwards onto the rocky escarpment, with walking sticks from found forest branches and an umbrella to ward off sunshine, it was thirsty work. Though we appreciated the variety of scenery and greenery, by noon, we were eagerly anticipating a change of socks, a refill of the water bottle and lunch at the next rest stop—equipped with portable potties!

As we pressed on in early afternoon, we became even more in awe of the courageous Mrs. Secord. Wearing a printed housedress and flannel petticoat, the 38-year-old Laura had left her five kids and wounded husband to travel through dangerous woods thick with trees. She carried on through swamps, up grassy ridges, and over boggy roads that had not been groomed and cleared by dozens of volunteers like the trail that we were experiencing. Coming upon Twelve Mile Creek, she crossed those swirling waters by way of a fallen log, while we sauntered over the new "Bridge at Laura's Crossing" commissioned by the Friends of Laura Secord.

Signs along the Trail let walkers learn the history of Laura Secord and more.

As for our group losing our way? No way. New trail signs affixed to trees pointed the way, meeting up at times with other famous trails such as The Bruce Trail or the Old Iroquois Trail. Indeed, the newly established Laura Secord Legacy Trail is now officially connected to Trans Canada Trail. A terrific 21-century technological bonus? Point your smart phone to any one of the Laura Secord Trail signs with a QR code marker to learn more about the Laura Secord story, or other interesting relevant stories!

For those planning to walk the entire route, the Trail will take you through an intriguing mix of town and country. Starting in picturesque Queenston, you'll wind through shady forest pathways that gradually rise up along the Escarpment, through woods and fields, along pleasant city sidewalks and through rows of vineyards planted by Niagara College.

But the trek is not simply about nature. Throughout the walk, you may come upon interesting curiosities such as the famed Screaming Tunnel (featured in Cronenburg's The Dead Zone), the historic plaque honouring Richard Pierpoint, a former slave who became a War of 1812 hero, and one of the area's first free black settlers, the DeCew Power Generating Station (the country's oldest continually running hydroelectric power generating station), or the remains of a gristmill. As you pass over the new bridge, you'll enter what's probably the prettiest part of the hike. This pathway brought us up into fields alive with swaying golden grass, birds flitting overhead, a pond and wildflowers waving petals in the breeze.

Finally, you'll wind up through woods of birch and poplar for the steep climb to the stone foundations of Captain John DeCew's house, the historic restored centerpiece of a new Heritage Park. It's an ideal place for a celebratory picnic on the expansive lawn, perhaps with a glass of something under the leafy black walnut trees or beside the scenic river.

Laura's final leg was not so carefree. Fatigued by her long day, she still had to clamber up the steep slope of the escarpment, losing at least one slipper in the climb. Just as the moon was rising, she came upon the crest of the hill (known today as Laura's Field) and witnessed a unique sight: a crowded encampment of First Nations. "By moonlight, the scene was terrifying," she later wrote. "As I approached, they all arose with one of their war-yells, which indeed awed me." Nevertheless, she gathered her courage, kept her presence of mind, and relayed her mission to the Native chief, that she had important news for Lieutenant FitzGibbon. If she could not give her message, "We would all be lost," she said. The Mohawk Chief agreed to show her the way and together they arrived at DeCew's stone house to meet with the British commander.

Upon hearing her plea, FitzGibbon sent scouts to verify her news. Two days later, the British-allied Aboriginal warriors from Kahnawake on the St. Lawrence River and from the Brantford area on the Grand River gathered. Supported by a small band of Irish, the Native contingent surprised and tricked the invaders, causing the Americans to surrender at the Battle of Beaverdams. It was a stunning victory against 600 enemy troops. And the rest, as they say, is history.

When she was 85, Laura Secord wrote a petition to the Prince of Wales: "When I look back I wonder how I could have gone through so much fatigue with the fortitude to accomplish it." The Prince sought counsel from his mother, Queen Victoria, and months later, Prince Albert sent her a hundred pounds in gold, the only financial reward she was to receive for heroic act.

As we finally plunk down on the lovely green expanse of the new DeCew House Heritage Park and admire the old stone foundations, we toast to Laura's bravery, the amazing new pathways of the Laura Secord Legacy Trail, and the fact that this one brave woman helped to save this beautiful part of Ontario to be enjoyed by all Canadians. 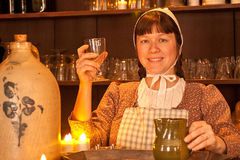 Bruce Trail Waterfall Walk: All the beauty, without the brawn
May 13, 2014 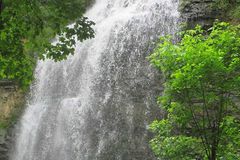