Many Canadians feel that something big – something really, really big – should be added to the Seven Wonders of the World.

The "New7Wonders," both of the world and of nature, were unveiled in 2007 and 2011 after the Zurich-based New7Wonders Foundation tabulated more than 200 million votes. The idea was to update the Seven Wonders of the Ancient World, six of which were destroyed centuries ago and all of which were man-made.

The introduction of a natural list may have been a good move, but according to a recent poll there is one glaring natural omission: Niagara Falls.

Last summer, Ipsos Reid found that 78 per cent of Canadians like the idea of having Niagara Falls declared the Eighth Wonder of the World, and that 75 per cent already view the famous cascades as a world wonder.

And for good reason: As much as six million cubic feet of water – enough to fill nearly 100 Olympic-sized swimming pools – pours over the crests of North America's most powerful waterfalls every minute.

But there's more to Niagara than simply admiring the thundering might. Here are seven unique diversions that help make the region Canada's most popular travel destination – and a truly deserving world wonder:

Journey Behind the Falls

You don't need a barrel to get up close and personal with Niagara Falls. After taking an elevator deep into the bedrock under Horseshoe Falls, visitors step into spray-filled tunnels that lead to a pair of portals located a third of the way behind the awesome sheet of water. As the current gushes past at 65 kilometres per hour, pancho-clad guests can proceed to upper and lower observation decks set at the very foot of the falls.

The iconic Maid of the Mist was replaced, and vastly improved upon, when Hornblower Canada took over cruise operations on the Canadian side of the falls in 2014. Now, a pair of sleeker and more spacious vessels glide past the American and Bridal Veil Falls before plunging into the soaking spray less than 100 metres from Horseshoe Falls. In summer, cruises cast off from sunrise to sunset – the latter complete with cocktails – and continue until a "Falls Illumination/Fireworks Cruise" provides a prime vantage point for the pyrotechnics that blaze over the floodlit cascades.

This bucolic town, nestled in the heart of the region's wine country, provides a charming contrast to the energy of the falls. Antique stores, artisan boutiques and fine dining establishments line Queen Street, the Shaw Festival hosts world-class live theatre, and historic Fort George stages thrilling War of 1812 re-enactments. More than 30 wineries host tastings, culinary events, live music and more in and around town, while upscale inns, such as the Shaw Club and Harbour House, let visitors retire in comfort and style.

Some of the biggest names in course design – Stanley Thompson, Douglas Carrick and Thomas McBroom – are behind the award-winning Golf Niagara tracks overlooking the river and bordering the historic grounds of the 1814 Battle of Chippawa. Legends on the Niagara is especially famous for its 45 stunning holes, while the acclaimed Whirlpool Golf Course cements the legacy of Thompson, nicknamed "The Toronto Terror" for his challenging layouts. In Niagara-on-the-Lake, a round at the town's namesake course – the oldest in North America – can be capped with a delicious local chardonnay on the glorious wrap-around porch of the luxurious Charles Hotel, which overlooks the ninth and final green. 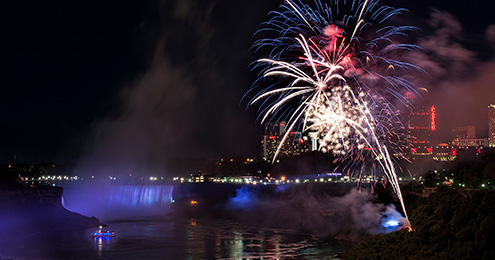 A fireworks cruise provides a prime vantage point for the pyrotechnics that blaze over the floodlit cascades.

No warm, dry weather? No problem: This balmy indoor facility just north of the falls is home to more than 2,000 colourful tropical butterflies, comprising 45 different species, that flit freely among exotic blossoms, greenery and water features. A 180-metre-long self-guided walking tour winds through the rainforest setting to the "Emergence Window," where the colourful insects leave their pupae and dry their wings before their first flight.

Surrounding the Butterfly Conservatory, 40 hectares of no-charge horticultural bliss include perennials, rhododendrons and azaleas, as well as a renowned rose garden with more than 2,400 blooms. A free downloadable app delivers guided strolls through the foliage, while horse and carriage tours are available during the summer.

The site of the bloodiest battle on Canadian soil is a much safer and more welcoming place two centuries after the War of 1812. These days, the National Historic Site lets visitors experience the sights and sounds of the fort under siege, with weaponry demonstrations, period costumes, guided ghost tours and an archeological speakers' series.

This content was produced by The Globe and Mail's advertising department. The Globe's editorial department was not involved in its creation.