From the runway, to your local home décor store, designers are having more fun than ever. Gone are the sublime whites, beiges and greys. Now bold patterns and colours rule the catwalk, and they're taking over at home too.

And you don't have to spend a lot of money to keep up with this trend.

"When it comes to spring, people want to update pieces in their home. They don't want to go out and buy a new sofa. Just by switching out their artwork or adding something as simple as toss pillows, they can get a fresh new look," says Tara Lindsay, a buyer at Decorium, a furniture and décor showroom in Toronto.

So get ready to set the mood for spring, with these tips that will have you mastering the season's statement looks in no time.

"Palms are the most coveted print right now," says Ms. Lindsay. "You're going to start to seeing it on wall décor, accent pillows and area rugs. The reason why it's so popular right now is that it introduces bold, bright green and, combined with black, it creates a really strong statement. It's also a great way to bring the outdoors in without having to go with a rustic feel."

Surrounded by palm prints, you can imagine yourself relaxing on a tropical beach, and that's certainly part of the appeal. Whether it's palm trees splashed across a tossed pillow, or giant green palm leaves on an area rug, or even a simple framed picture with palm leaves in it, there are many ways to incorporate this vibrant look.

The key is to use it sparingly and well. "You don't want to overdo it," Ms. Lindsay says. "You have to pick and choose what's going to suit your space best."

The popularity of the palm print is in part due to the allure of green these days. "Greenery," a fresh-spring like shade, was named Pantone's colour of the year and the shade has spread to a range of décor items.

Think you're having a flashback? Think again. Macramé is back and it's hot, says Ms. Lindsay, noting its rise of popularity in wall décor, tapestry, planters and hammocks.

"It's so pretty. It's so light. It has that boho feel. And it gives a natural feeling to the space," she says. "It's made from cotton and and natural rope, so it brings that outdoorsy feeling inside, but in a more creative and artistic way. It's really earthy in a very unique kind of way."

For wall décor, macramé tapestry hung on walls promises to be all the rage. "It's wall art without being a picture," says Ms. Lindsay, who notes that macramé is appearing in area rugs too. 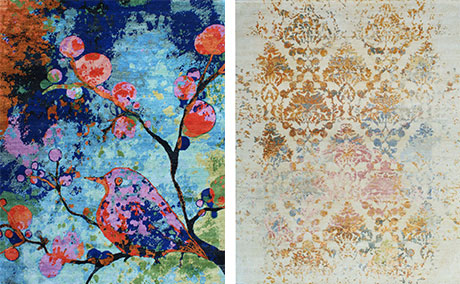 Add a bold statement to your room choosing either bright design or a distressed pattern. (Credit: Imperial Carpet & Home)

Blue may be a colour that goes in and out of fashion, but it's certainly having a moment right now. "We're seeing more teals, and navy too," says Imperial Carpet's Ms. Pokrzywa of what's trending in textiles today. "It might be the traditional navy, or mixed with gold, or a mixture of green with navy and gold."

While we love blue in fashion, it can be daunting as a home décor colour. "Some might be afraid at first to work with it, but there are so many different shades of blue," says Ms. Lindsay. "You should be able to find at least one that will work with something you already have."

From a dark-navy velvet accent chair to a blue and white table lamp, the colour lends an airy feel to any room. It creates a unique living space, says Ms. Lindsay. While recent years have seen blue in the form of pillows and rugs, the colour is migrating to newer and bolder placements. "You'll see it now on sofas or chairs and table lamps," says Ms. Lindsay. "You can have a grey neutral tone setting but suddenly you introduce a table lamp that has blue in it, and you get that really nice pop of colour."