Canadians are generous people and care for one another, says Sylvie Madely, CARE Canada's vice president of fundraising, marketing and partnerships.

"But more and more, we're a people of the world. People travel a lot, see a lot and are exposed to what goes on in the world. We're part of a global village," she adds.

This awareness and willingness to tackle international challenges supports CARE Canada's work to provide humanitarian aid in times of crises, and its mission to end poverty, says Ms. Madely.

More than 760 million people around the world earn less than US$2 a day and are categorized as living in extreme poverty, but there are solutions, says Douglas Stollery, a member of CARE Canada's board of directors.

"As citizens of the world, Canadians have a role to play. We can make a difference," he adds.

Mr. Stollery says one the fundamental ways to attack poverty is to work towards changing attitudes to gender equality and to empower women and girls in developing countries.

He saw the impact of this first-hand during a visit to Ethiopia in 2014 where he met with CARE staff and with people in the villages where the organization was active.

One of the CARE initiatives Mr. Stollery observed in action was micro financing in the form of village savings and loan associations managed by women. 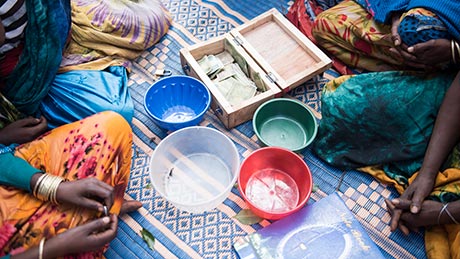 A meeting of a CARE initiated village savings and loan association in Ethiopia.
(Credit: MICHAEL TSEGAYE/CARE)

A CARE invention, these savings groups offer women, in particular, a safe way to save money and access loans. No outside capital is needed. Only a lockbox, three keys held by different members and some basic financial training.

"The women may save a dollar a week and the funds are kept by a woman chosen by the group," he says. "The women then consider applications from the members of the association. For example, a woman may use a loan to buy a second goat for the family. The result is the family has a second goat, and the sale of its milk is a significant source of income."

This improvement in the family's finances has a direct impact on the status of women in the family and in the broader community.

"Their ability to contribute to family finances has an impact on their ability to take part in family decisions, including decisions on family planning," says Mr. Stollery.

Since CARE introduced village savings and loan associations in 1991, the organization has formed more than 200,000 groups with an estimated five million members across Africa and other parts of the globe.

He recalls speaking with a man who told him through an interpreter that prior to his wife's involvement with the savings and loans association, he would not have agreed that money could be used for his wife's health. However, once she began making a financial contribution to the family he believed it was "right" that she be involved in decisions about the family's finances, the family's health and her own health.

Mr. Stollery says this is a powerful example of how one small step can change attitudes in a community and have a long-term impact on the individual and the community.

Ms. Madely agrees. "It starts with one person at a time. The way CARE works is all about empowering people to do for themselves," she says. "We don't just come to a region with band-aid solutions. We work very closely with people locally to find solutions and to empower them to do for themselves."

CARE gives them the tools, knowledge and learnings to improve their own lives and to multiply the impacts, she says. 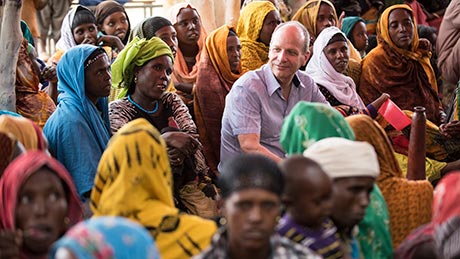 "For example, in Zimbabwe we visited a region in Masvingo where CARE worked with gardeners and farmers and distributed seeds. Those people are now helping villagers in other regions."

"Canada was lauded for its contribution to the issues related to HIV/AIDS at a time when many other countries have reduced their budgets," he adds.

"They're giving to people they have never seen in their lives. They want to make the world a better place and believe it's everybody's right to live in dignity, and that poverty is an injustice. We all have a responsibility to alleviate that," she says.

CARE was established in 1945 to send CARE Packages to people in need after the Second World War. It is now one of the world's largest non-governmental humanitarian and development organizations.

This content was produced by Randall Anthony Communications, in partnership with The Globe and Mail's advertising department. The Globe's editorial department was not involved in its creation.