Darkwoods and the surrounding mountains have a long history of human use by First Nations groups, primarily the Ktunaxa, dating back thousands of years. The 20th century was a time of intensifying resource use as towns were established and the population grew.

The expanse of land that is now Darkwoods first became a property in 1897 when it was named a Crown grant to the Nelson & Fort Sheppard Railway. The property passed through the hands of six different resource companies until 1967, when it was bought by a German duke.

For the next 40 years, the duke's forestry company, Pluto Darkwoods, maintained a European-style sustainable forestry operation on the property. The company's efforts to minimize the impact of the timber harvest on the overall health of the forest allowed the property to retain much of its ecological value.

In April 2008, the Nature Conservancy of Canada (NCC) purchased the Darkwoods lands from Pluto Darkwoods Forestry Corporation in the largest single private land purchase for conservation in Canadian history.

There is not just one feature that makes Darkwoods such an important natural treasure. The property contains a multitude of special characteristics. Some of these are tangible, like the plants and animals that make their home here. Others are less easy to see, but just as vital to the long-term protection of nature and culture in the region. For example, Darkwoods is an important source of clean water that pours into Kootenay Lake and other water bodies. It is also a highly valued part of the wilderness backyard to the surrounding communities, who use it for recreation and resources.

Darkwoods contains some of the most diverse forests in British Columbia, including priceless old-growth stands of vanishing inland temperate rainforest. Because they receive most of their moisture from snow, these "snow forests" are biologically unique, yet we know very little about them. Conserving Darkwoods provides an unprecedented opportunity to expand our knowledge about one of the world's rarest ecosystems.

Darkwoods is home to 19 confirmed species at risk, and scientists expect to confirm more as we continue our research on the property. Of particular concern is the South Selkirk herd of mountain caribou, listed as an endangered species in the U.S., and which is critically dependent on Darkwoods for the animals' winter range.

Darkwoods plays a critical role in preserving freshwater systems throughout the South Selkirk Mountains, influencing 17 separate watersheds, numerous streams and more than 50 lakes. All this water not only provides sustenance to the forests and animals on Darkwoods, it provides valuable habitat for a plethora of birds, insects, reptiles, amphibians and fish.

Kootenay Lake and its surroundings have inspired and supported human cultures for thousands of years, and today is no different. In the past, Darkwoods has been a valuable source of jobs in the woods. NCC strives to maintain that tradition, and continues to create active employment for the local community through our forest management activities.

Darkwoods is also important for the human spirit, offering a rare opportunity to enjoy the peace, solitude and natural beauty that are increasingly rare in this world.

The Nature Conservancy of Canada (NCC) is the nation's leading not-for-profit, private land conservation organization, working to protect our most important natural areas and the species they sustain. Since 1962, NCC and its partners have helped to protect more than 2.6 million acres (1 million hectares), coast to coast.

Putting nature on your bucket list makes for a happier life
June 26, 2012 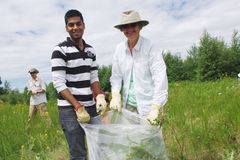